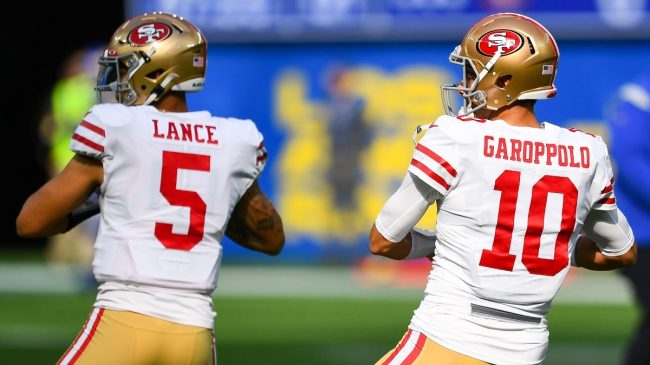 San Francisco 49ers fans are likely tired of hearing about the quarterback situation. Regardless, Hall of Famer Kurt Warner shared his perspective on the situation, as it sheds some light on what might be transpiring in San Francisco. Trey Lance is the starter, but Jimmy Garoppolo’s shadow looms in the near distance.

During an appearance on the Pat McAfee Show, Warner expressed his opinion on Trey Lance and Jimmy Garoppolo. He uses his own experiences to provide a possible inside look at what’s going on in the minds of the 49ers quarterbacks.

It’ll be interesting to see how the remainder of the season plays out. Lance didn’t look great in Week 1, albeit, he was playing in a monsoon. The 49ers’ coaching staff is likely to give the young quarterback a decent-sized leash. However, Jimmy Garoppolo is going to be right there if Trey Lance struggles too much.

With that in mind, keep an eye on the 49ers. Kurt Warner’s comments seem accurate, but only time will tell how it goes down in San Francisco.