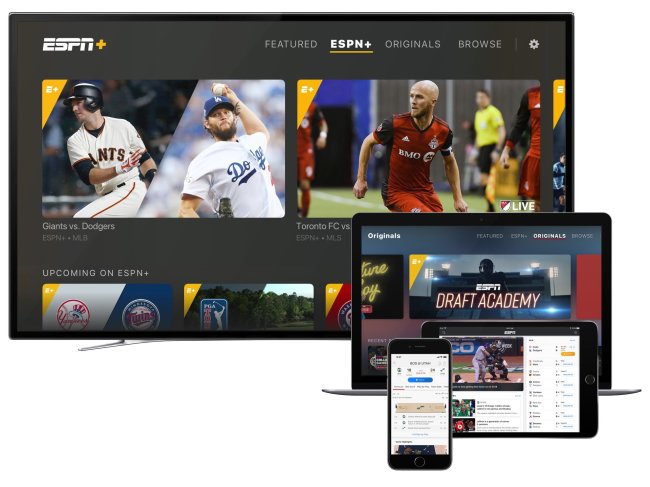 With fans back in the stadiums at sporting events, it finally actually feels like sports are back!

And that’s no different for the live sports streaming experience. Isn’t half the fun being able to watch your favorite player stare down the opposing fans after making a huge play? I think so. And then there’s the added enjoyment of seeing your rival’s fans, head in their hands, coping with the fact that this is indeed not their year.

After a year of missing out on that, there’s no way you’ll want to miss out again. And now that the live sports game is evolving, it’s easier than ever to keep up on all of it. Well, as long as you’ve got ESPN+, but what true sports fan doesn’t already.

ESPN+ is the home of all things sports. There’s no one out there bringing you live sports and exclusive content from the four biggest American sports AND international soccer, Championship Tennis, the UFC, and so much more. And for only $6.99 per month (the cost of one cup of coffee these days) or $69.99 per year, you get access to all of it.

The live sports streaming experience with ESPN+ doesn’t end with the clock hits zero, or 90 if you’re watching soccer. From the entire catalog of 30 for 30 documentaries to original series like Stephen A’s World or Peyton’s Place with Peyton Manning, there’s so much content, you’ll have no reason to leave the couch.

ESPN+ is the home to the most games AND best teams in the country when it comes to college football. And now that it’s almost halfway through the college football season, you should have a decent idea on whether your team has what it takes to make the playoffs. And more likely than not, they sadly don’t. So instead of making yourself suffer through the rest of the season, it’s okay to pick a new team for the remainder.

And ESPN+ is bringing the heat by giving you more games than ever before. With 500+ college football games from 16+ conferences, there’s no shortage of coverage for you to find your new team.

Think the SEC is taking two teams to the playoffs? With ESPN+ you get access to select live games from teams like LSU, Auburn, Kentucky, Missouri, Ole Miss, Tennessee, and more.

Maybe you’ve only supported your alma mater and are now venturing into uncharted waters and need some guidance to make sure you’re making the right selection with your new team. No need to worry, you’ll get behind-the-scenes coverage with exclusive articles from ESPN’s renowned College Football insiders.

Once you’ve figured out your new team or made the painful decision to stick it out for one more year, the true streaming experience begins. Fans can pause, rewind and replay every single live game offered. So if you’re still getting used to your new team’s schedule, you’ll never have to worry about missing the opening kick-off. And you can even go back and watch the first half of their season and rid yourself of that bandwagon status.

Alright, maybe you’re convinced that no matter what team you support in college football, it’s just never going to go right. In that case, it’s time to switch gears and may we suggest taking it to the ice? That’s right, for the first time since 2004, the National Hockey League is back on the sports streaming giant.

Beginning October 12 with a season-opening double header, ESPN+ will showcase the world’s best hockey. And with access to more than 1,000 out-of-market NHL games and 75 exclusive games per season, ESPN+ is a must have for hockey fanatics.

And if that’s not enough hockey, you can relive last year’s quest for the Stanley Cup with an all-access pass to the NHL’s top teams from the bubbles in Toronto and Edmonton, exclusively on ESPN+.

Craving some hard-hitting action outside of the United States’ biggest four sports? ESPN+ is your destination for all things UFC, including exclusive PPV events and Fight Nights. If that’s not enough to satisfy your combat sports itch, you’ll also get access to exclusive UFC originals and studio shows like Dana White’s Contender Series, UFC Destined, and UFC Fight Island: Declassified. Plus, Detail with Daniel Cormier and archives of the UFC’s greatest fights.

If you prefer the ring over the cage, ESPN+ is still your go-to destination with Top Rank Boxing. Stream live fights, as well as sitting ringside for hundreds of the most legendary bouts in the history of boxing, including fights like Mayweather vs Pacquiao, Holyfield vs Foreman, Ali vs Fazier, and many more.

How to Maximize Your Streaming Experience with ESPN+?

For only $6.99 per month or $69.99 per year (and able to cancel at any time), ESPN+ is the only choice when it comes to sports. Where else can you watch exclusive sporting events followed by analysis from some of the biggest and brightest in the sports world? Nowhere!

Let’s be real — you can’t possibly call yourself a sports fan if you don’t have an ESPN+ subscription. That’s just how it is these days. You can practically watch any live sport event. ESPN+ is also home to an entire section of exclusive shows that break down and discuss the biggest sporting events in the world. From fantasy football talk with Matthew Berry to UFC breakdowns with MMA fighter Chael Sonnen, the content is endless on ESPN+.

Remember, you’re not tied down to TV with ESPN+. No matter where you are, you can access all ESPN+ content via the ESPN app on your computer, tablet, smartphone, streaming device, or smart TV.