UFC 238 Live Stream: How To Watch UFC 238 On ESPN+ Featuring Cejudo Vs. Moraes 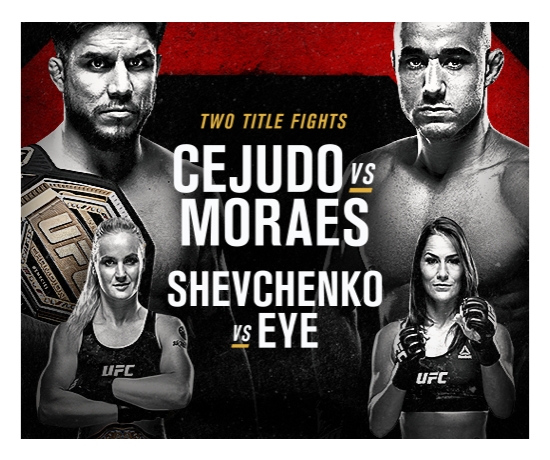 It’s about that time again, fellas; fight night, with UFC 238 featuring a main event of Henry Cejudo against Marlon Moraes in one of the most anticipated fights this summer as two of the most game fighters the UFC lightweight division has ever known go head-to-head. And if you’re wondering how to watch UFC 238 this weekend, Saturday June 8, ESPN+ is your exclusive spot to take in the hard-hitting action.

Not yet an ESPN+ subscriber? Well, it might be time to get on that, because the streaming service offers the most in-depth UFC coverage, among other sports content, giving fans an exclusive home for all things UFC. Plus, if you sign up for the service now, a yearly plan is only $79.99 per month, which is 25 percent off of the original value of $109.98. Talk about a knockout deal; see what we did there?

Will Henry Cejudo, the reigning UFC Flyweight Champion and Olympic gold medalist, continue to build his reputation as one of the sport’s pound-for-pound best? Will he be able to snatch the bantamweight championship belt from No.1-ranked Marlon Moraes, who has been on a tear through the BW division, finishing opponents in jaw-dropping manner?

In addition to the Cejudo-Moraes bout, UFC 238 features another tasty matchup between Women’s Flyweight Champion Valentina Shevchenko and the No. 1 contender, Jessica Eye, so it’s about to go down in the Octagon.

Plus, here’s a friendly reminder that ESPN+ offers a FREE 7-day trial, meaning you can get all the content you want from the sport without committing too much.

If you’re a sports fan, ESPN+ is the one-stop shop to consume all sorts of your favorite content. From documentaries to live sporting events to original shows like Detail with Kobe Bryant, ESPN+ has you covered. And for those diehard UFC fans out there, the streaming service is even more badass, because it ‘s the exclusive home for the demolition inside the Octagon — and there’s no better time than before UFC 238 to scoop a subscription because there are a ton of tasty storylines.

If you’re planning on watching the badass action of UFC 238, don’t forget about all the exclusive UFC programming that ESPN+ has for you to watch. Here’s some of what you can expect with your subscription to the streaming service.