How To Watch UFC 252: Stipe Miocic vs. Daniel Cormier 3 On ESPN+ 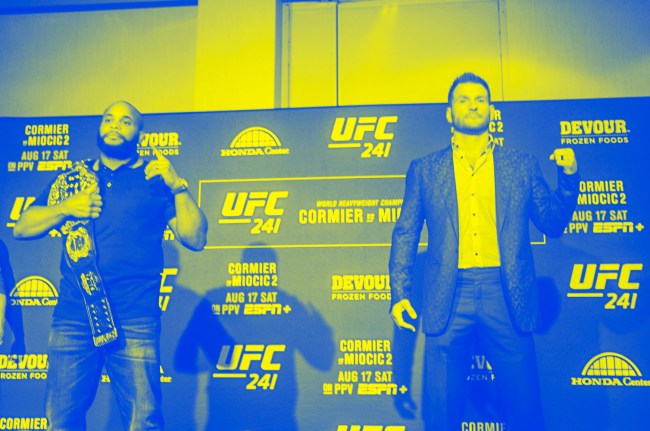 We’ve got a trilogy coming our way, sports fans, with Stipe Miocic vs. Daniel Cormier 3 about to go down at UFC 252, making the event one of the more highly-anticipated in recent memory. The bout, which is a UFC Heavyweight Championship fight, pits the current two-time champion (Miocic) against a former champion (Cormier) in the main event — and ESPN+ is the only place to take in the hard-hitting action.

Although UFC 252 isn’t until Saturday, August 15th, that doesn’t mean you can’t already order the event on ESPN+.

And, in addition to the headliner of Stipe Miocic vs. Daniel Cormier 3 in the Heavyweight Title bout, there are a few other tasty matchups to look forward to as well, meaning you can sit around all day long and take in the drama of the UFC — and, oh boy, will there by drama.

With tons of storylines, one thing’s clear: No sports fan wants to miss out on UFC 252 — so make sure to tune in on ESPN+.

While all the fights at UFC 252 are intriguing, the main event of Stipe Miocic vs. Daniel Cormier is the one that draws the most attention; and with good reason. The two have been part of a couple epic bouts against one another already, with Miocic earning the Heavyweight title from Cormier at UFC 241 via TKO, which came after Cormier’s knockout victory against Stipe at UFC 226 for the belt. So, yeah, as Cormier tweeted, the upcoming fight is for all the marbles.

This one is for all the marbles. 1-1, both knockouts but great fights, I can’t wait to fight this dude again!! Now it’s time to work as hard as I ever trained. #weareaka #zinkinsportsmanagement #2xheavyweightchamp 2xlightheavyweightchamp pic.twitter.com/BvyhectS4X

The only place to watch UFC 252 is ESPN+, and you can order the fight and get a year-long subscription to the streaming service for just $84.98; which is over 25% off the regular price.

And for those diehard UFC fans, get yourself ready for UFC 252 by watching some great ESPN+ Originals ahead of the fight — like Detail: Daniel Cormier: Breaking Down Max Holloway, and the 30 for 30 film Chuck & Tito.

Remember, ESPN+ is the exclusive home for all the action inside the Octagon. So, if you’re already planning on watching UFC 252, you’ll want to make sure you score yourself all the dope content that the streaming service offers. Just look at some of the programming on ESPN+ that you’ll get with a subscription.

If you’re a sports fan, ESPN+ is the one-stop shop to consume all sorts of your favorite content. And while waiting for UFC 252 to take place on August 15th, the streaming service will be a lifesaver to get your sports fix with hours of content.