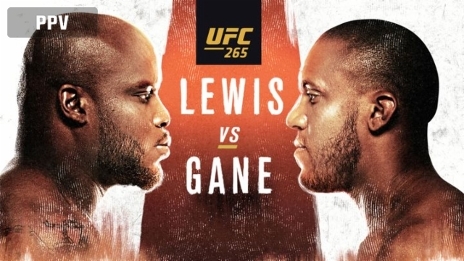 UFC is not waiting for reigning heavyweight world champion Francis Ngannou and has booked the interim title fight at UFC 265 between top 5 heavyweights Derrick Lewis and Ciryl Gane. With summer coming to an end, this may be one of your last chances this year to sit back and drink some beers with the guys. And what better way to spend that time than watching a 5 round showdown between two Top 5 heavyweights in the UFC.

Derrick Lewis, the #2 ranked knockout artist, is currently tied for most UFC knockout wins in UFC history with 12 so far. With his tremendous knockout power, you know Lewis is never truly out of the fight. Meanwhile, right behind in the rankings, Gane has looked fantastic through nine professional bouts, going undefeated so far. With the interim heavyweight gold on the line, every UFC fan should be prepared for August 7th for UFC 265.

With lots of potential excitement to be had at UFC 265, every sports fan will want to make sure to stream the event via ESPN+, which is the exclusive home for all things UFC. Trust us, this is not the time to skip out on watching sports.

UFC 265 is set for this Saturday, August 7th. And to make sure you’re all set for the hyped event, you can already order the event via ESPN+.

In addition to the headliner of The Black Beast vs. Ciryl Gane, the rest of the Fight Card has names like Jose Aldo, meaning you can lounge around all day enjoying the UFC. Take a look at the scheduled bouts below.

With the interim heavyweight gold on the line between top 5 heavyweight contenders, you don’t want to miss out, so make sure to tune in to UFC 265 on ESPN+.

The only place to watch UFC 265 featuring Lewis-Gane is on ESPN+, and you can order the fight and get a year-long subscription to the streaming service for just $89.98. The PPV for UFC 265 alone costs $69.99, so you’ll experience serious savings by getting yourself a subscription to ESPN+ right now.

The World Wide Leader in Sports

And for those diehard UFC fans, get yourself ready for UFC 265 by watching some great ESPN+ Originals ahead of the fight — like The Return Of The Ultimate Fighter, and the 30 for 30 film Chuck & Tito.

As the exclusive home for all the action from inside the Octagon, ESPN+ is a must-have for every sports fan. So, if you’re already planning on watching UFC 265, you’ll want to make sure you score yourself all the dope content that the streaming service offers. Just look at some of the programming on ESPN+ that you’ll get with a subscription.

ESPN+ is the one-stop shop to consume all sorts of your favorite content. And while waiting for UFC 265 to take place on August 7th, the streaming service will be a lifesaver to get your sports fix with hours of awesome content.