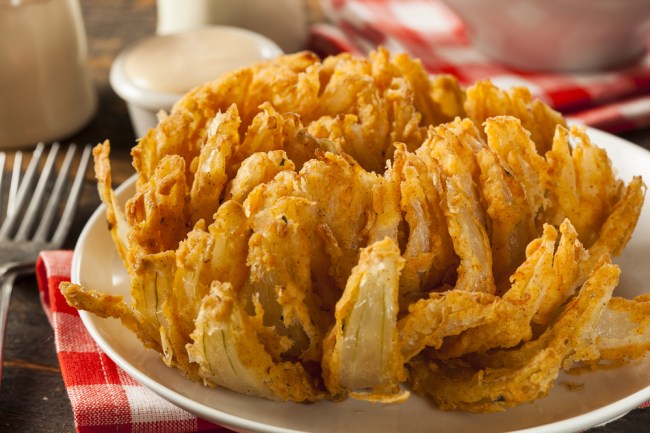 One Twitter user spent all of 2017 tweeting at the Outback Steakhouse and the Outback Bowl Twitter handles in an effort to become the Human Bloomin’ Onion at the 2017/2018 Outback Bowl. Well, they fuckin’ did it.

Twitter user @celebrityhottub (real name Ryan Nanni) has a bit of a cult following to begin with, so this helped with the campaign. He’s got 74,000+ Twitter followers and works over at EveryDayShouldBeSaturday.com where they focus on, you guessed it, College Football. If you’ve been following @celebrityhottub for a while on Twitter then you’ve no doubt seen him tweeting at one of the various Outback accounts but it all went viral yesterday on Twitter Moments™ thanks to one of those ‘How many RT’s?!?’ tweets that gets shit done.

Outback came in with a very low number and within hours he’d locked up his position as the Human Bloomin’ Onion at the 2017/2018 Outback Bowl. Here’s how it all went down, starting on January 3rd of last year:

hi @outbackbowl how do I get this job next year

Hi @Outback – do you have a list of the duties required of the Bloomin’ Onion mascot? I want to make sure I get any necessary training.

Guess who's never been accused of practicing the occult arts? That's right.

.@outbackbowl hey just wanted to check in, see if i need to get measured for the onion suit or anything

.@outbackbowl hey just checking in on that thing

.@Outback maybe you think I wouldn't be the bloomin onion full time

maybe you're very wrong about that

It was a strong effort. Here’s where things took a turn in his favor and he finally saw his dreams come true:

For the better part of a year, I’ve been telling y’all I want to be Bloomin Onion Man at the Outback Bowl. At first, it was just a fun goof for the Fullcast and such.

But now that we’re getting closer to the game itself…I like REALLY want to do this. So I’m going to try a bit of a Hail Mary (sports term) here, shameless social media style.

Ok, @Outback. How many retweets is it going to take for you to let me fulfill my destiny and become Bloomin Onion Man?

He almost fucked up there, as noted below, by tagging @Outback instead of the Outback Bowl Twitter handle but it all appears to have worked out in the end:

here's the thing, nanni. i want you to fulfill your dream. but you don't exactly inspire confidence when you tag @outback the restaurant in your request, instead of @outbackbowl. don't worry, @outbackbowl, i assure you he's sufficiently competent to be your bloomin' onion mascot

YOU GOTTA GO STRAIGHT TO THE TOP

He’s got a fish on the line:

Those are Bloomin' big shoes to fill. 10,000 retweets! #FryinNanni

The Belk Bowl wanted in on the fun:

hey @outbackbowl – this is going to be amazing.

The Outback Bowl was blissfully unaware of how much Twitter clout this bro has:

ME YESTERDAY: i do not care who the bloomin onion man is

ME TODAY: WE MUST BAND TOGETHER TO MAKE @celebrityhottub THE BLOOMIN ONION MAN

Now, the tweet’s up over 12K retweets and Outback conceded. They’ll be making him the Human Bloomin’ Onion at the 2017/2018 Outback Bowl:

We should’ve made that harder 😂 Send us a DM so we can get your measurements to the onion fryer. #thisishappening

Wearing it with pride:

Y’all are awesome. I promise to wear that big beautiful onion with pride and honor.

If this isn’t the single best College Football-related story of the 2017-2018 season then I don’t know what is. Just one man, following his dream, and getting to transform into a Human Bloomin’ Onion for one glorious day. Kind of makes me want to pop out and grab a half-Bloomin’ Onion for lunch. Most people don’t know that they’ll cut it in half for you and that way you can feel better about eating it all by yourself. Pro tips only.