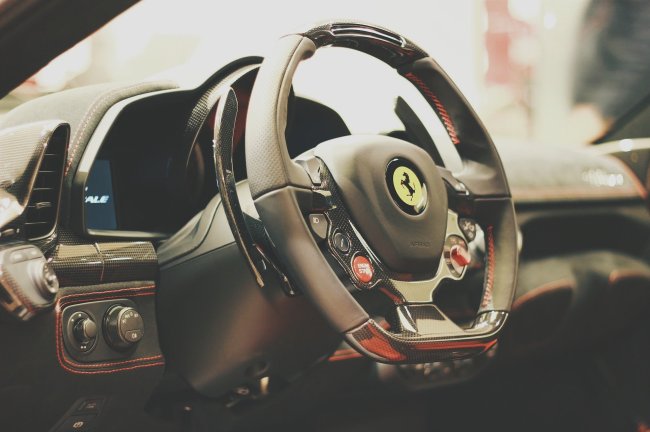 PGA golfer Ian Poulter is a wealthy man. He has only won 2 PGA tournaments throughout his entire career but he’s racked up 49 top 10s and 111 top 25s. That has earned him a cool $25,796,695 in career earnings on the course. He’s also sponsored by Titleist, Mutual of Omaha, EA Sports, Nikon, MasterCard, Oakley, and others.

Ian Poulter’s estimated net worth is somewhere in the range of $60 million which helps explain his outrageous car collection. The man owns FOURTEEN FERRARIS. Fourteen of them. Owning one Ferrari is extravagant but the man has fourteen of them. His collection includes an Enzo, F40, F50, a 1962 California Spider which is worth $11 million, and a LaFerrari Aperta which you’ll see below.

I’m saying all of this because the only rationale I have for how calm and collected Ian Poulter is while hitting this chip shot through the windows of his LaFerrari is that he’s obscenely rich and has so many Ferraris that he really doesn’t think about the value all that much. It also appears this video was made possible by Aurae Lifestyle who would’ve probably footed the bill on any broken windows or damage. He casually pulls up, gets out of his car, walks onto the spongy grass, and hits a chip shot through the windows.

What are the odds that was a trick ball and not a solid golf ball? I’m thinking pretty good. It hurts my head to think that they would’ve used a real golf ball and just hoped against hope that Poulter got the shot right on the first try.

Poulter is currently 88th in the FedEx Cup Standings (where he’ll finish the season) and his best finish this season was a T5th at the Workday Charity Open. Despite registering ONLY ONE top-10 finish this season he still earned $1,034,334. So let that sink in for a moment, the 88th ranked player on the PGA Tour this year still earned $1,034,334 despite only finishing in the top 10 once.