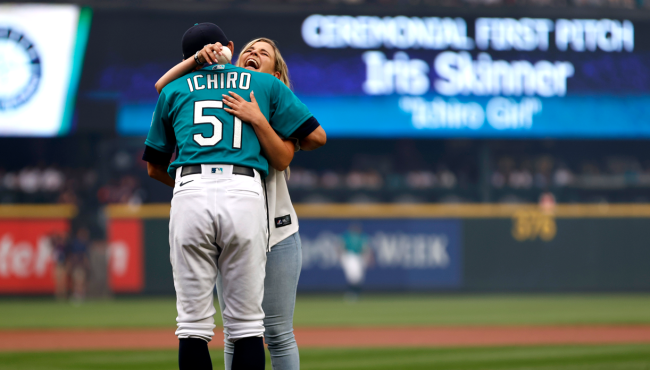 This past weekend, the Seattle Mariners honored one of the best players to ever play for the franchise, Ichiro Suzuki.

The 48-year-old, who looks like he could still play (and still has mad skills) was inducted into the Seattle Mariners Hall of Fame on Saturday. He is the 10th player to be inducted, and the first since Jamie Moyer in 2015.

During that time, he made many fans, but very few went as viral as 17-year old Iris Skinner did in 2010.

Skinner’s shocked and thrilled reaction to getting so close to Ichiro during that 2010 game earned her the moniker “Ichiro Girl” – a nickname that has stuck with her to this day.

So, with Ichiro set to be inducted into the Mariners Hall of Fame on Saturday and keeping with the theme of the weekend, Seattle invited “Ichiro Girl” to throw out the first pitch Friday night.

Prior to that moment, Skinner reminisced about the day that made her famous in Seattle.

“I couldn’t see where the ball was going and I was scared it was going to hit me so that’s why I was kind of leaning away. Because of that I had no idea that Ichiro was coming towards me since I was looking the other way,” she told Lookout Landing.

“We just hit each other pretty hard. I look over and I see Ichiro and and I also remember the sun was behind his head. I thought he was an angel, I thought I died. So I just saw this like, this silhouette and then he asked me if I was OK and I said yes. Then, you know, he ran off and that’s when I had a meltdown.”

What Iris Skinner didn’t know as she walked out on to the field at T-Mobile Park Friday night was who was going to be catching her ceremonial first pitch: the man himself, Ichiro Suzuki.

“Ichiro Girl” reuniting with Ichiro is the most wholesome thing we’ve ever seen 🥹 pic.twitter.com/vrM41SHLaB

How fantastic was that?

During his induction speech on Saturday, Ichiro showed why he was such a fan favorite.

“Even though I retired as an active player, baseball and Seattle have never left my heart,” Ichiro said during his speech. “Baseball will forever be my soul. And my mission is to keep helping both players and fans appreciate this special game.”

He also had a message for today’s Seattle Mariners players.

“I want our players to know I am with you in your fight to be the best,” he said. “I was 27 years old when I came to Seattle. I could never imagine my career in America last 19 seasons and that I will still be in Seattle today.

“With that in mind, I would like to say to the current players: Your future has possibilities that you cannot imagine as well. So embrace it by giving your best without imposing limits on yourself. If a skinny, undersized guy from Japan can compete in this uniform, and then stand before you tonight to accept this honor, then there’s no reason you cannot do it.”