LOOK: Idaho Football Is Rocking Some Of The Best Alternate Helmets You’ll Ever See 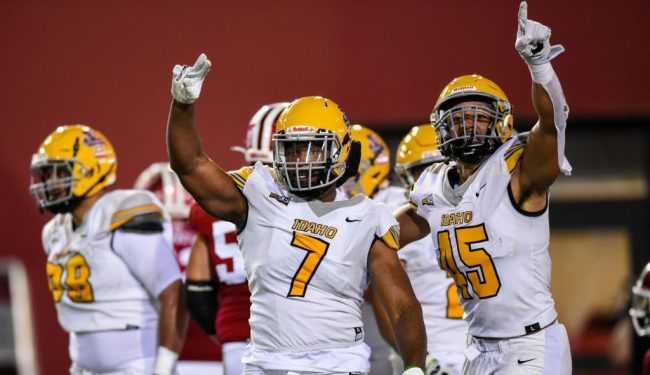 Idaho football team has had one winning season in the last 11 years and returned to the FCS level in 2018. Since then, the Vandals lost seven games in each of their last two seasons.

Head coach Paul Petrino’s team is 2-3 thus far in 2021 and is set to face a 6-0 Eastern Washington team this afternoon. Despite the on-field struggles, the program is trying to pull the upset against the nation’s No. 2 team and is tapping into whatever motivation it can.

To do so, Idaho is rocking the best alternate helmets in college football. The team typically wears a block I on its helmets.

Today, it will wear “Grumpy Joe.” The helmet features a cartoon version of the team mascot and they couldn’t be more awesome.

Breaking out the Grumpy Joe this weekend! All set up and ready for our showdown with the Eagles in Cheney tomorrow morning. #GoVandals pic.twitter.com/13VbN4cKWd

The story behind the team’s mascot is pretty simple.

Here is what it says on the team website:

Idaho’s student-athletes go by a name earned nearly a century ago by a basketball team coached by Hec Edmunson, whose teams played defense with such intensity and ferocity that sports writers said they “vandalized” their opponents.

As for “Grumpy Joe,” there is a good backstory on his tradition as well:

The tradition of Joe Vandal began in the late 1950s when yell leader Bill Currie made a sideline appearance as the spirited and enthusiastic “Joe the Vandal.” With a homemade mask created by his mother who worked in the art department, Currie motivated the University’s eager fans. Currie was invited to travel with the team and do anything he could to “draw attention to himself.”

Joe’s traditional mascot costume was replaced by an inflatable suit in the early 2000s and people were FURIOUS. The school ended up going back to the traditional costume and held a ceremonial deflating. Fans went wild.