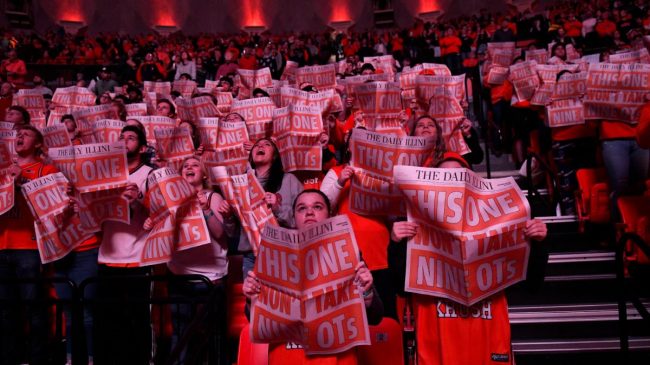 The Illinois Fighting Illini have captured a share of the Big Ten regular season title.

The Illini were able to knock off conference foe Iowa in the season finale over the weekend to move to 15-5 in league play. That mark was good enough to tie Wisconsin for the top spot.

As is the case with championships in March, it didn’t take long for Illinois fans and students to get out of their seats and storm the home court in celebration. It was pure jubilation, mixed in with a bit of chaos, and one unexpected surprise that had to bring a smile to your face.

Illini student Zain Bando was part of that group that rushed the floor as he celebrated amongst 15,000 of his closest friends at the State Farm Center.

One thing that makes Zain a bit different, though, is that he did this while in a wheelchair. He suffers from the condition cerebral palsy, which affects movement, muscle tone, and posture.

He wasn’t letting that hold him back from joining the party on Sunday, though.

Check out his awesome entrance below.

How about this dude in the electric chair storming with them! pic.twitter.com/VAeFdhmySD

Who Is Zain Bando?

Bando is self-described freelance journalist and aspiring media expert. His personal website states that he holds vast experience in scoreboard production, freelance writing, and work within the disability community.

Bando is a senior at Illinois Urbana-Champaign where he’s majoring in journalism.

According to his resume, the writer and production expert has experience working with the Big Ten Network, the Rollin’ Illini radio broadcast, and a popular sports news site called FanSided. At FanSided, he focuses on both Illini basketball and MMA.

Zain is set to graduate this year but his passion for sports and social media is something that’s driven him since high school.

Oh, and he’s obviously one of the Illini’s biggest fans.

Bando’s storming of the court was uplifting to some, and just downright awesome to others. Social media was quick to credit Bando as having been the culprit rushing the floor, as well as support him for just being a great overall human being.

“Hot wheels”, @zainbando99, is an incredible writer and more creative than the intern that runs the main account will ever be. Fire this intern and hire Zain https://t.co/ehQKzEPBCp

Bando was ecstatic about the response received on social media. His timeline is filled with retweets and replies to those that have shown love.

I bought a shirt! @barstoolcarl

Not even the security team was stopping Zain from getting to celebrate with the Illini faithful. He tweeted out that he was told not to go on the court, but he did it anyway.

Security told me not to go but I did it anyway. 😂