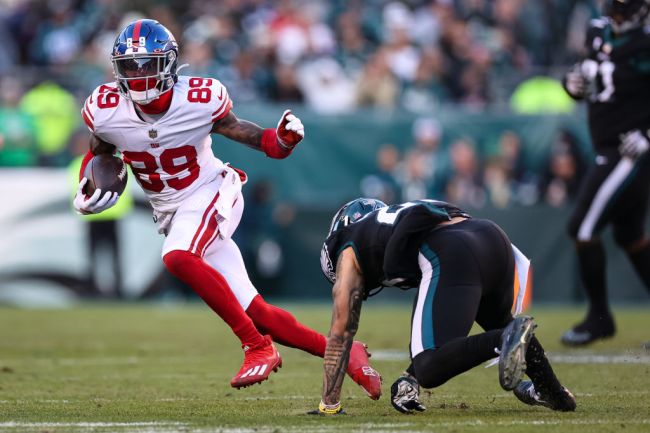 Since the moment the New York Giants drafted him, Kadarius Toney has seemingly been unable to find his footing with the team. His career started with an odd training camp where he practiced barefoot because he brought the wrong size shoes.

Once he got going during his rookie season, he flashed his ability on the field, but struggled to stay healthy. Then, this offseason he showed up late to the Giants voluntary workouts.

Now, he has another issue that is going to make it tough for him to really establish himself with the team. It was revealed today that Toney had to undergo offseason knee surgery.

Giants wide receiver Kadarius Toney had a minor arthroscopic knee procedure, sources say, which is why he’s been in a red jersey on the side at spring OTA practices. But he is expected to be fine and ready for training camp https://t.co/bKuPntYrtA

Luckily, this isn’t expected to keep Toney out of Giants training camp, but it is concerning nonetheless. Toney is early in his career, but is already becoming a regular on the Giants injury report.

Hopefully whatever it was that required the procedure won’t hinder him this season as he’ll be a player the Giants are expecting to make an impact in 2022. The Giants offense is likely going to look very different next season with Brian Daboll as the head coach and Mike Kafka as their offensive coordinator.

Toney’s speed has a good chance to be an important facet of this new offense as the Giants try to find weapons that work for Daniel Jones. Hopefully this procedure helps him capitalize on the potential the Giants saw in him a year ago.