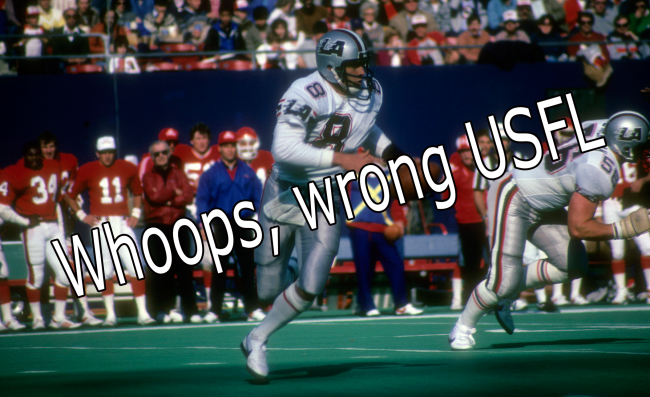 The “inaugural” USFL draft began on Tuesday night, continuing on Wednesday, and it has already produced some great reactions from fans.

Yes, they are calling it the “inaugural” USFL draft, despite the fact that a league with the exact same name held three drafts from 1983 through 1985.

According to Steve Ehrhart, former USFL executive director, he still owns the league rights to the USFL and the league “still exists,” but here we are.

This new version of the USFL got the ball rolling by letting each of the eight teams select a quarterback in the first round.

There will be a total of 35 selections by each team. Michigan won the lottery to get the first overall pick, but the entire draft will be conducted using what the USFL is calling “an analytical modified snake system … so that each team has two No. 1 picks at two positions.”

Round 2 is in the books! pic.twitter.com/84LtLkI3uC

Rounds 5 through 7 saw offensive tackles selected. Cornerbacks went in rounds 8through 11. Then they circled back and chose quarterbacks again in round 12.

Many of the picks were made by celebrities from the cities where the teams will be playing including Bo Jackson, Terry Bradshaw, Drew Brees, Warren Moon, Michael Strahan, Brad Keselowski, Jimmy Rollins, and Big E from the WWE.

Here’s what will be happening on Wednesday…

Day 2 of the USFL Draft will start at 9 a.m. CT on Wednesday and will proceed until 35 rounds are completed. From Round 13 until Round 23, teams will have 90 seconds per pick, and the positional order will be wide receivers in Rounds 13-17, safeties in Rounds 18-19, center in Round 20, inside linebacker in Round 21, and guards in Rounds 22-23.

Football fans, now that the NFL season is over, seem to be having a lot of fun with the USFL draft and hearing some of the names they haven’t thought about in awhile being called. Sadly, for the many, many people commenting, Johnny Manziel was not selected by any USFL team.

Praying for Blair Walsh to be drafted

None of these are Johnny manziel

The USFL took a big swing and a miss by not televising this on mainstream cable. You want to create a following in your inaugural season and nobody can watch the draft unless you subscribe to TV streams that you have to pay for. UNBELIEVABLE!!!!

He is not wrong.