Former USFL Exec Says They Still Have Rights To Name And Logos, Wonders How New League Got Permission 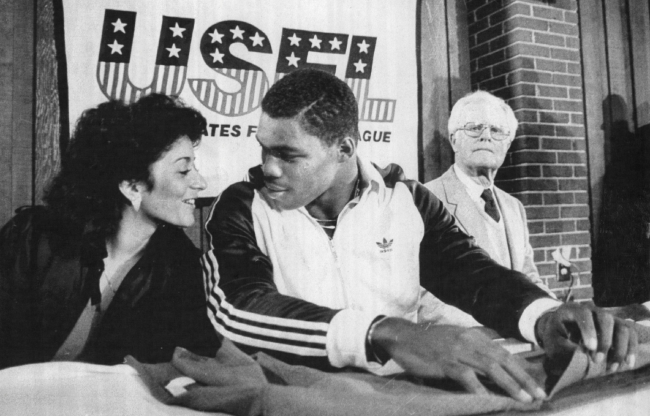 There have been a plethora of failed professional football leagues that have tried to compete with the NFL, but the USFL was the only one that actually had a chance to do it successfully.

Sadly, the league made the crucial mistake of trying to go head-to-head in the fall against the NFL, sealing the league’s demise.

On Thursday, it was revealed that a new version of the USFL will begin play in the spring of 2022 with backing from its official broadcast partner Fox Sports.

“I was surprised when I heard about it this morning,” Ehrhart told the Philadelphia Inquirer. “I want to dig into it and see who they’re claiming they acquired these rights [to the name] from. Because it didn’t come from any legitimate source.

“My guess is there’s some knucklehead out there who claimed he had registered the name and had the rights to it. We’re not being antagonistic. But if they want to do this, they should do it the right way and talk to the actual people, not some guy who sent in an internet registration or something like that.”

Ehrhart added that the league retained the rights to the USFL name after “winning” its lawsuit against the NFL in 1986.

“It’s not a big check, but we have a bank account in the USFL name,” said Ehrhart. “So, we’ve been in continuous use for nearly 40 years. So they would need to sit down and talk with us. We’d be open to doing that.”

Brian Woods, a co-founder of this new iteration of the USFL, was a financial adviser for the failed Alliance of American Football and associated the last two years with The Spring League.

When asked to comment on how the new league acquired the rights to the USFL name, Fox Sports spokesperson Anne Pennington said, “We stand by what was in the press release.”

“We were only around three seasons, but the USFL was a classy, well-respected name,” Ehrhart added. “We always said that we didn’t want to just jump in there and sell it to somebody who was going to be underfunded and blow up and give a halfway kind of effort. So we never did give or sell or authorize the rights to anybody.

“If Fox is a partner in this and they want to sit down with us and discuss this, and we think it makes sense, we’re certainly open to that.”

The Inquirer attempted to get comments from Woods and Fox Sports CEO Eric Shanks regarding the rights to the USFL name, but were unsuccessful.