Apparently, There Was A XFL Video Game In The Works And There Are Screenshots To Prove It 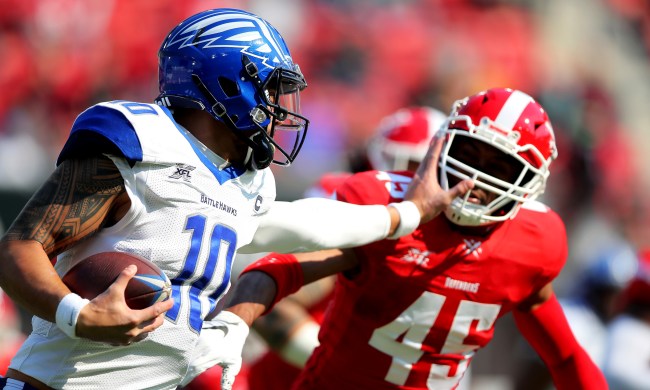 Well, this is disappointing. Before the pandemic shut every sport down and killed the second incarnation of the XFL, which was actually doing pretty well, the league was working on a creating new video game.

According to XFLnewsroom.com, shortly after the news broke that Dwayne “The Rock” Johnson and company had purchased the XFL out of bankruptcy, screenshots emerged on the internet showing that the XFL was going to be part of the sim game Doug Flutie’s Maximum Football.

Speaking of the @xfl2020…remember the time that @MaxFootballGame almost had the #XFL in our game before the pandemic hit and closed the league down? pic.twitter.com/YHCtMYjnAf

• Recreate Flutie magic – Play as Hall of Fame Quarterback Doug Flutie in Play Now or Season Mode
• New gameplay experience – brand new animations and player models have been added for 2019
• You will feel the hits with our physics based tackling system
• Multiple Rule Sets, Field Sizes and Ball Types – Play the type of football you want – select between US Pro, College and Canadian Football options
• Practice in The Spring League – Hit the practice field and perfect your plays in our Spring League branded Practice Mode

Hopefully, whatever deal the XFL had in place with Maximum Football will still be in effect when The Rock and company officially take over the league.