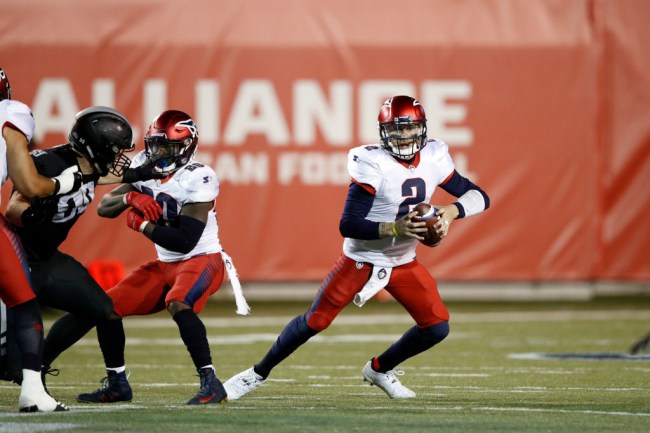 Early last year, Vince McMahon made waves when he announced he was planning on bringing back the XFL in 2020 because he apparently wants to be responsible for more concussions than he already is.

A couple of months after the announcement, McMahon had his spot blown up when filmmaker Charlie Ebersol decided to launch a league of his own in the form of the Alliance of American Football, which kicked off its inaugural season back in February.

The AAF actually came out of the gate pretty strong over its first few weeks and had its profile raised after Johnny Manziel decided to join the league after getting banned from the CFL.

However, the AAF has been plagued by financial problems and it was reported last month that the league was in dire need of a $250 million cash infusion in order to stay afloat.

Things got even worse last week when it was revealed the AAF was on the brink of going defunct unless the NFL came to its rescue and, welp, that didn’t exactly go as they wished.

On Tuesday, multiple sources reported the AAF would be ceasing all football operations effective immediately after it failed to work out a deal with the NFL.

All @TheAAF football operations will be suspended in the next few hours, per source with knowledge of situation. League is not folding, yet. But it's heading that way.

While the league’s co-founders had a three-year plan in place, majority owner Tom Dundon wanted the AAF to serve as a feeder league to the NFL as soon as possible, which wasn’t exactly the best idea in hindsight.

Did people have jokes? Of course people had jokes.

Garrett Gilbert goes down as the greatest quarterback in AAF history

If the AAF folds today, it would have lasted 52 days from its first game to end, 20 days shorter than Kim Kardashian’s marriage to Kris Humphries. pic.twitter.com/lYKtvc8qd2