The AAF Is Reporting Some Seriously Impressive TV Ratings, Despite All The Uncertainty With Its Finances 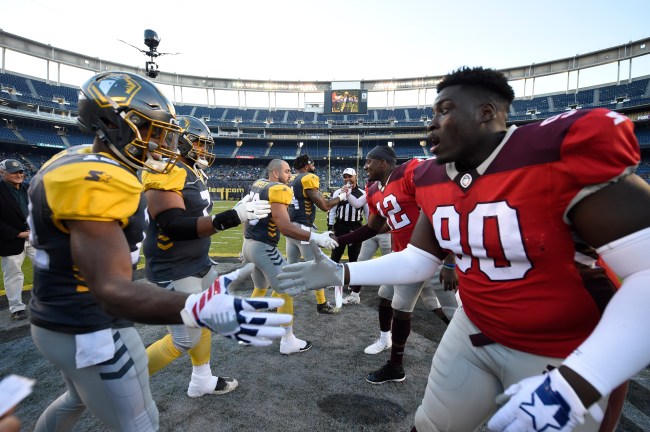 The Alliance Of American Football (AAF) might not be the NFL, but that hasn’t stopped sports fans from plopping down in front of their TVs the past three weeks to watch the league to get their football fix. And, while there have been some talks about the AAF’s finances — more specifically, a report that the league nearly missed payroll after Week 2 and need an “emergency” $250 million investment — the TV ratings for the Alliance Of American Football have actually increased week over week, which is pretty impressive.

According to Awful Announcing, Week 3 of the AAF saw about one 1.0 million viewers during its TNT broadcast, as well as an additional 491,000 an 515,000 from its NFL Network games, proving that there’s some serious interest in what the Alliance Of American Football is doing, despite the NFL cast-offs and reports of financial floundering. While ratings from the CBS Sports Network and B/R Live broadcasts aren’t available, one would consider that, given the intrigue on the other networks, fans were tuning in on both spots as well.

While those ratings aren’t extreme or anything, they do represent 16 and 21 percent week-over-week gains for the AAF, which is something any business would be proud of — especially one competing for air time with other professional leagues like the NBA, NHL and MLS, as well as college basketball during the same slots. More importantly, it shows that, despite all the reports that the league might be in danger of surviving, fans are generally interested in the games, with many enjoying some of the different rules that the NFL doesn’t have.

Although the above numbers fall short of the 2.9 million viewers that the Alliance Of American Football averaged for its Week 1 debut, league officials have to be happy that ratings haven’t nosedived, with the stats actually competing with or beating some of those aforementioned leagues like the MLS and NHL broadcasts.

Who knows how much the Alliance Of American Football is actually earning from these TV contracts, but the fact that there’s interest is a sign that more ad revenue could be coming soon for companies who want to be part of the league. Plus, who knows how the AAF might evolve the rest of this season and into next in terms of marketing the product and testing out other ways to bring its content to fans.

In terms of attendance, AAF games seem to be pretty empty so far — and that’s something that needs to be addressed — but, for the time being, one would think the league is happy that they’ve not only gotten an audience, but they’ve retained one, too. It’ll be interesting to see if the TV ratings continue to grow as the league’s season continues.