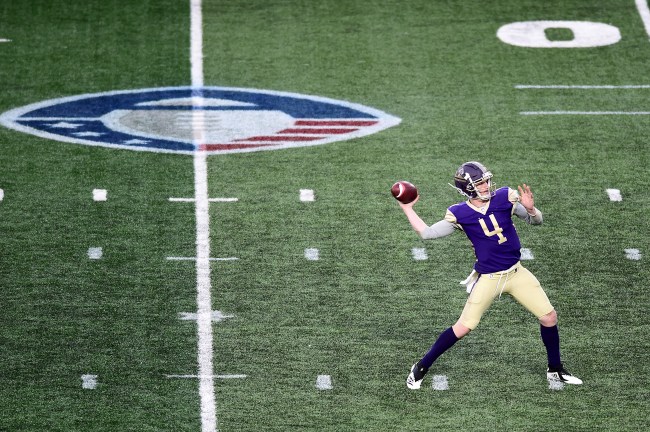 The onside kick is almost always a fruitless endeavor for the kicking team, especially after the NFL implemented rule changes on kickoffs in an effort to reduce concussions.

USA Today reported in November that through Week 11 of the 2018-2019 NFL season, kicking teams had recovered three of 34 onside attempts, an 8 percent success rate. This is a dramatic decrease from last year’s 23 percent conversion rate when 13 of 55 onside kicks were recovered by the kicking team.

The Alliance of American Football, despite its challenges and flaws, have abandoned the onside kick altogether and implemented an alternative that is equal parts brilliant and exciting. The rule states that if a team is down by 17 or more points or trailing with 5 minutes or less left in the game, they can attempt an onside conversion following a touchdown with a 4th-and-12 play from their own 28-yard line.

The execution of this rule made its debut Sunday when the Atlanta Legends went for a conversion attempt during their game against the Birmingham Iron, with the Iron up 28-12. The 4th-and-12 play resulted in a converted 48-yard hail mary, but ultimately proved trivial after Atlanta quarterback Matt Simms threw a game-clinching interception on the very next play.

There's no such thing as an onside kick in the AAF. Instead you have the option to take the ball on your own 28 and face 4th and 12. It happened today:pic.twitter.com/snrzBSd5wO

The majority of fans were huge supporters of the rule, with many saying it would be even more exciting if teams were required to convert on 4th-and-20 rather than 4th-and-12.

I think I fuck with this rule. What you bros think?