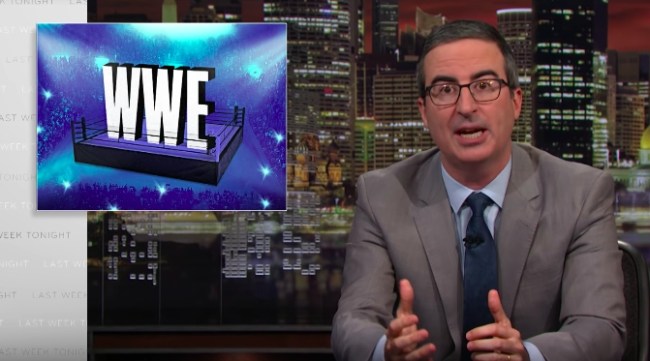 In order to truly appreciate professional wrestling, you need to know how to suspend your disbelief and not think too hard about exactly why all of these very muscular people with an affinity for spandex are throwing themselves around the ring and beyond.

Of course, one of the biggest knocks against wrestling is that it’s not “real” and to that I say:

Sure, the WWE might be a glorified soap opera but you have to be truly ignorant to not respect the skills of its superstars, who spend years honing their craft and constantly put their bodies on the line for our entertainment.

Unfortunately, all of this abuse adds up and it’s become increasingly clear that there are plenty of repercussions that come with repeated blows to the head as more and more wrestlers fall victim to CTE and other ailments stemming from their time in the ring.

However, the WWE has done everything in its power to act like there’s nothing wrong, and as a result, John Oliver decided to take them to task on the most recent installment of Last Week Tonight with one of his vintage takedowns.

During the segment, Oliver highlighted the fact that WWE wrestlers are treated as independent contractors and that there’s almost no support system in place—including health insurance—when they fall victim to the dangers of the job.

He was also more than happy to rip into Vince McMahon, saying:

“While the character Vince is an asshole, it’s important to know that the real Vince is also an asshole…

Even the NFL, for all its massive faults, now offers players health reimbursement accounts and has legitmate funding for older players who may be dealing with health issues. When you have lost the moral high ground to the fucking NFL you are morally subterranean.”

After the episode aired, a number of people in the wrestling community chimed in to thank Oliver for bringing the issue to light.

Thank you for covering this. https://t.co/7X5vqddx64

and to clarify, I'm not trying to encourage "this company's bad, this company's good" mud slinging or nit picking. just encouraging folks to support alternatives since the competition for your interest will create positive outcomes for wrestlers across the board.

I shit my britches, please RT @LastWeekTonight (I love you!) @iamjohnoliver

ESPN contacted me on doing a story about concussions for e60 years ago. I told them that wasn’t the story. The story was on “independent contractors”.
Congrats to @iamjohnoliver & #lastweektonite for their great piece & I hope it gets people taking.

However, according to Fox News, the WWE probably isn’t going to change its ways anytime soon based on a statement they issued:

“John Oliver is clearly a clever and humorous entertainer. However the subject matter covered in his WWE segment is no laughing matter. Prior to airing, WWE responded to his producers refuting every point in his one-sided presentation. John Oliver simply ignored the facts.

The health and wellness of our performers is the single most important aspect of our business, and we have a comprehensive, longstanding Talent Wellness program. We invite John Oliver to attend WrestleMania this Sunday to learn more about our company.”

I can only wonder if XFL players are going to get the same treatment (or lack thereof).