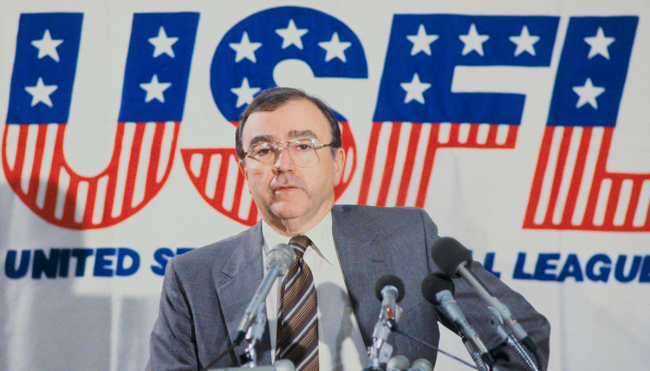 Historically speaking, launching a professional football league positioned as an alternative to the NFL is the sports equivalent of trying to invade Russia winter; plenty of people have tried to do it over, but the vast majority of them have failed in a fairly spectacular fashion.

It’s been a little over two years since the AAF folded eight weeks into its inaugural season, and if you managed to find a sportsbook that let you wager on whether or not the XFL would last longer than it did during its first incarnation, you probably walked away with a pretty solid payday if you bet the under when the league filed for bankruptcy after the pandemic forced it to cease operations after a five-week run.

When you compare it to those two examples, the United States Football League actually had a pretty good run. After launching in 1983, the USFL seemed like it had the potential to hold its own until its owners—led by Donald Trump—flew too close to the sun by deciding to try to go head-to-head with the NFL by pivoting from a spring schedule to one that was supposed to kick off in the fall of 1986.

The USFL did manage to score a pyrrhic victory by winning the anti-trust lawsuit it filed against the NFL that year only to hit a bit of a snag when the court ruled the upstart league was entitled to a whopping $1 in damages. While that amount was tripled due to antitrust laws, those two extra bucks somehow weren’t enough to salvage things.

It’s been 35 years since that fateful ruling, but on Thursday, we were treated to a pretty wild development, as ESPN reports the USFL is coming back from the dead after announcing plans to officially reboot when the eight teams it will tentatively consist of take the field in the spring of 2022.

USFL legend Doug Flutie linked up with official broadcast partner Fox Sports for a video in which he tried to explain what will set the new USFL apart, calling it “pro football at the highest level” (although I’m sure the NFL might have a thing or two to say about that claim).

The USFL is back! Catch all the action next year on FOX Sports.

The new venture is being launched in conjunction with The Spring League and is being positioned as an alternative for players who may not have the skills required to make an NFL squad. The USFL will likely be competing with the third incarnation of the XFL, and while plenty of people seem to be excited by the prospect of a spring filled with football, there are others that are slightly more skeptical this will be the organization that manages to avoid repeating history once again.

I’m very much looking forward to all the tweets about the first weekend of USFL games next spring and then never seeing any ever again.

A key element of USFL history: they landed some big names in part by getting in front of NFL free agency, which was still yrs away. But wasn't economically sustainable. And now, NFL salary caps are set to rise substantially in future yrs, ensuring no serious talent goes elsewhere

The problem with these "other football leagues" like the XFL, AAF, etc, and I predict the problem with the proposed USFL reboot, is that there's no real money behind them. They plan on making $, but can't survive the losses long enough to turn a profit.

Fox Sports: THE USFL NEEDS TO MAKE A COMEBACK https://t.co/eGTxG7w4rl

Will that end up being the case? I guess we’ll find out soon enough.