Indiana Defensive Back Ejected After Punching Michigan Player With A Helmet On, When Will People Learn? 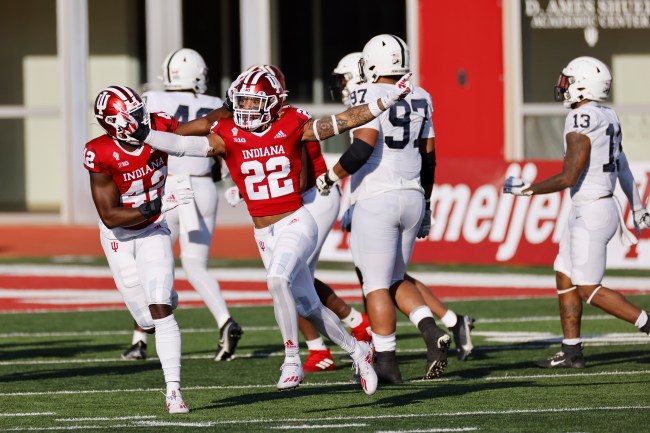 When are we going to stop doing this?! Indiana safety Jamar Johnson was ejected from Saturday’s game against Michigan early in the first quarter for an unsportsmanlike conduct penalty after punching an opponent in the head.

Johnson is a 6-foot-1, 197-pound junior, one of the team’s top tacklers and far-and-away the team’s best player in the secondary. He got thrown out for throwing a very ill-advised haymaker. To be fair, Wolverines wide receiver Ronnie Bell was all up in his grill and probably deserved to get knocked in the noggin, but the awareness has to be better for one of the Hoosiers’ most important defensive players.

More importantly, why are we still punching people with helmets on? It doesn’t bode well for anyone involved, but it certainly doesn’t make much sense for the punch-thrower. Let’s hope that this trend never stops for content sake, but for the players’ sake, it might be better to, well, not do that.

Johnson will head to the locker room and watch No. 13 Indiana try to continue their impressive start to 2020 with a home win over No. 23 Michigan, which comes off of a demoralizing loss to in-state rivals Michigan State last week. Wolverines head coach Jim Harbaugh’s seat is getting warmer as the end of his contract inches closer, and Saturday might be a must-win for one of the highest paid coaches in college football. His team will have an easier time facing the opposing defense without Johnson sitting on the third level waiting to step up and lay the wood.