Indianapolis Colts Interested In Bringing Phillip Rivers Out Of Retirement 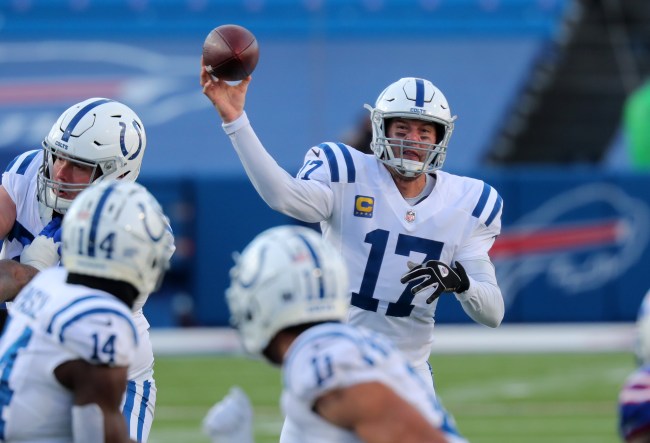 The Indianapolis Colts were just dealt a major blow at the worst possible time. With two games left in the season, the Colts are still fighting for their division and a playoff spot. That just got a lot more difficult with the news of Carson Wentz’s positive test.

Wentz will now miss this week’s game against the Raiders, leaving the Colts with two uninspiring options on their roster. Neither Sam Ehlinger nor Jacob Eason has given the organization much reason to believe they can succeed as the team’s starter. That has led the team to look to their past for an answer.

According to a report, the Colts are looking to bring Phillip Rivers out of retirement to lead the team for the next two weeks.

Colts need to call Philip Rivers. Have heard it's being discussed.

If Rivers still has enough left in the tank, this is a move that could make a lot of sense. Rivers is already familiar with the offense after serving as the team’s quarterback last season.

During that season, Rivers led the Colts to the playoffs and put up 4169 touchdowns and 24 touchdowns. That is likely all of the proof the Colts need that he can lead the team against the Raiders run defense with Jonathan Taylor available to carry the offense.

This also isn’t the first time we’ve heard about a team reaching out to Phillip Rivers this season. Reports surfaced recently that the New Orleans Saints had reached out to him to QB Monday night’s game against the Dolphins. With the way the game played out, Rivers probably gave them a better chance than Ian Book.

This is far from a done deal, but would an interesting new wrinkle to a crazy NFL season.