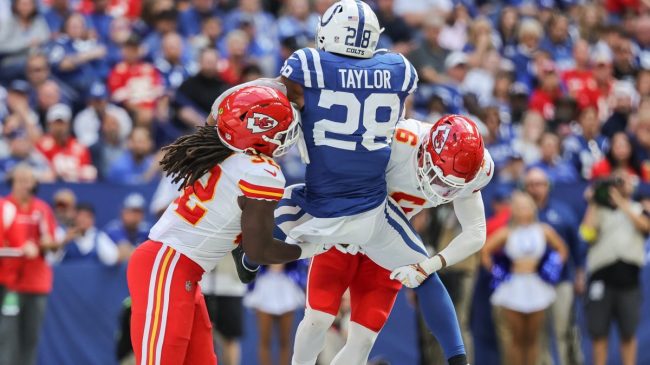 Indianapolis Colts star Jonathan Taylor is one of the best running backs in the entire NFL. Much of that is due to Taylor’s incredible physical gifts, such as speed, power and agility. But much of that is also due to his incredible consistency.

Taylor has topped 1,000 yards in each of his first two NFL seasons and led the league by far in 2021 with 1,811 yards and 18 touchdowns. The Wisconsin product has missed just one game in his career, and that was due to a COVID-19 exposure.

He’s also never missed a practice. That doesn’t just apply to his three-year NFL career. It applies to his entire football career. Until now.

Indianapolis held its star back out of Wednesday’s practice for precautionary reasons after he suffered a toe injury against the Kansas City Chiefs on Sunday.

According to Taylor, it’s the first time he’s missed a practice since prior to his high school football career.

One thing Jonathan Taylor said today: He's never missed a practice in high school, college or in the pros. A COVID-19 close contact forced him to miss the second Tennessee game last year, but he didn't miss a practice.

Though he did miss the start of the 2022 mini camp due to precautionary rest. Taylor is not expected to be at risk of missing Sunday’s AFC South clash with the Tennessee Titans.

He and the Colts are looking to turn around what has been a rough start to the new year. Indianapolis is 1-1-1 on the young seasons and Taylor has rushed for just 286 yards through three weeks on only 61 carries. The Pro Bowl back still ranks fourth in the league in rushing behind Nick Chubb, Saquon Barkley and Cordarrelle Patterson, who has experienced a career renaissance since making the switch from wide receiver to running back. Though Taylor has scored just one touchdown thus far.

Meanwhile, first-year Colts quarterback Matt Ryan has struggled mightily. The veteran has thrown for just 769 yards, three touchdowns and four interceptions. So Taylor’s importance to the offense cannot be overstated.