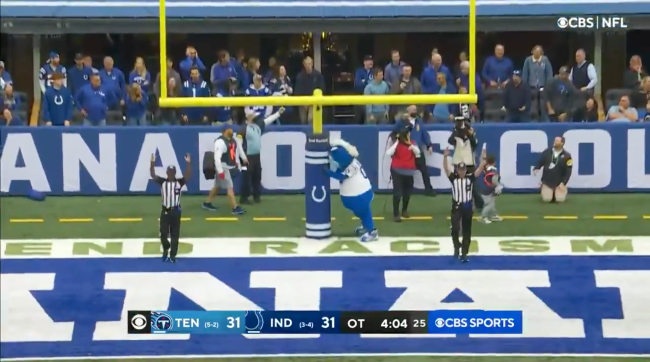 When it comes to rivalries in the NFL, the Colts and the Titans is amongst the most competitive in recent years. That was certainly the case on Sunday as Tennessee traveled to Indianapolis for one of the best games of the year that provided an all-time mascot reaction.

After jumping out to a 14-0 lead at the end of the first quarter, the Colts allowed the Titans to get back in the game with a 14-3 run in the second quarter. Both teams continued to trade blows in the second half and Tennessee actually took a lead with one minute and 26 seconds remaining.

Five plays and 75 yards later, Jonathan Taylor punched it in from one yard out to send the game to overtime.

Indianapolis got the ball first in the extra period and proceeded to punt. As did Tennessee.

On the next drive, Carson Wentz looked to go deep to Michael Pittman but threw and interception and gave the ball right back.

Per the NFL’s new overtime rules, a field goal could then win the game for the Titans. A short pass to A.J. Brown and a run from Derrick Henry set up a 44-yard attempt.

Fat Randy Bullock trotted out to try and win the game and nailed it.

As the ball went through the uprights, the Colts’ mascot ‘Blue’ had a hilarious reaction. The anthropomorphic blue horse who wears a white Colts jersey with a horseshoe on the front saw the kick go in, walked over to the field goal and banged his head against the goalpost.