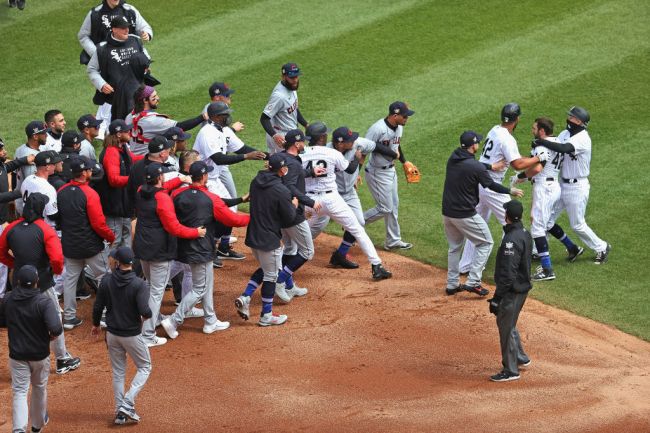 Adam Eaton hasn’t always been the most friendly or well-liked baseball player in the MLB. He’s never won a popularity contest amongst teammates, opponents or fans, and that might be a nice way to put it. The nine-year league veteran has played for four different teams throughout his career and is in his second stint with the White Sox.

Things were so dysfunctional during his first three years with Chicago from 2014-2016 that former manager Ozzie Guillen said that “nobody liked him” in the team clubhouse. The root of the dislike was a strange, long-standing beef between Eaton and Todd Frazier.

Eaton’s poor reputation around the league isn’t to say that he is the MLB’s most-hated player, but the Ohio-native did not make himself any friends during those few years. He has since spent time in Washington and won a World Series with the Nationals in 2019 before returning to the South Side of Chicago this season.

The 5-foot-9 outfielder is hitting .262 with three home runs, 11 runs scored and 10 RBIs in 42 at-bats to begin the year and got caught trying to stretch a two-bagger on Thursday. Eaton stepped up to the plate in the bottom of the first inning against Cleveland and knocked a base hit into the right field gap. The Indians threw down to third in hopes of getting lead-runner Tim Anderson, so Eaton tried to make his single into a double.

Anderson arrived safely at third base and Indians third baseman José Ramírez threw back to second with hopes of catching Eaton, who slid into the bag and was called out. Eaton didn’t take kindly to the way that 22-year-old Andrés Giménez incidentally pushed him off of the base to apply the tag and got up angry. He gave Giménez a very weak shove and slapped away the efforts of second baseman César Hernández, who stepped in to try to break things up— even though Giménez didn’t try to fight back and was more confused than anything.

Eaton’s angry demeanor caused both benches to clear and he was pulled away from the light back-and-forth screaming aimlessly into the abyss.

BENCHES CLEAR IN THE 1ST INNING!

Adam Eaton was BIG mad after he got pushed off the base by Andrés Giménez. pic.twitter.com/4JtqANRpfL

Baseball is a beautiful game and bench-clearing brawls are up there with home runs, walk-offs and stolen bases as the most exciting parts of the sport. However, Eaton’s measly shove was weak sauce and the dugouts clearing was incredibly soft. Both teams hate each other, and nobody appears to be a fan of Eaton, but come on. No punches were thrown and Eaton went over to approach Giménez and Hernández in conciliatory fashion before heading back to the dugout. Lame.

The kerfuffle came on the back end of a crazy four-game series between Cleveland and Chicago. Monday’s game ended in a walk-off hit-by-pitch, Tuesday went into extra innings after Shane Bieber threw nine scoreless frames, and Wednesday saw Carlos Rodó toss the 20th no-hitter in White Sox history after coming one hit-by-pitch short of a perfect game.

It’s been a wild week at Guaranteed Rate Field and Eaton almost started the craziest incident with his whining.