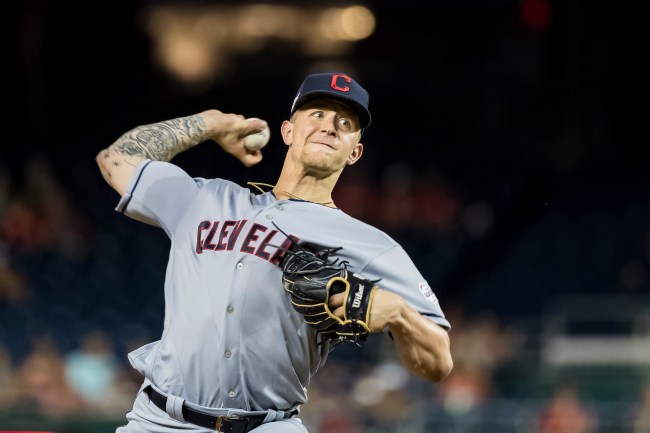 On Sunday Plesac was sent home and placed on the team’s “restricted” list for being in violation of the rules when he broke curfew and was caught by a MLB security official returning late to the team’s hotel.

Can confirm that the Indians sent home starter Zach Plesac after he violated team rules by leaving the hotel to go out in Chicago, as The Athletic reported. Cleveland has been extremely stringent with protocols, and this action is a warning to their players — and perhaps others’.

On Thursday, Plesac took to Instagram to defend himself after he says he was being “dragged across the mud” by the media. Plesac admits that he and teammate Mike Clevinger broke MLB rules by leaving the team hotel and staying out past curfew with friends during a road trip to Chicago but says that he was taking extra precautions to stay safe.

A few days prior to leaving for this trip, the MLB came up with these new protocols that required a curfew and some other things that would keep us more isolated as baseball players and contain us more in like a bubble-type sense,” Plesac said. “After my start, I went out to dinner with some buddies. We ended up going back to his place — the same group that we went to dinner with … Just hanging out, having a good time. We broke curfew, I came back late and I was reported by MLB security being out in public and coming back late to curfew.

Fans were not sympathetic towards Plesac and went on to crush him for his explanation.

He even admitted it. ONCE WE OPTED IN, HE AGREED TO ABIDE BY MLB PROTOCOLS. HE ON TAPE ADMITTED TO BREAKING PROTOCOL. Regardless if he went to dinner and a friends or the grocery store and gas station. He is wrong and put others at risk, with CLEAR disregard for all teammates. https://t.co/DzkiF221Xx

And rightfully so. Not to mention, one of his own teammates is currently in remission from Lukemia. https://t.co/NbpHSj9ikS

They must be dipping these Cleveland pitchers in stupid before they come up to the bigs https://t.co/c97PcDMo4A

Hard to feel sorry for a guy who continues to show a complete lack of accountability here. https://t.co/GFsgLueLpw

This guy is an absolute idiot. How can you be this stupid? So glad he’s not on my team. #WhiteSox https://t.co/nxZ8HrC3Fq

Yeah, and he deserves to be dragged across the mud, along with ℂ𝕝𝕖𝕧𝕚𝕟𝕘𝕖𝕣. Total clown shows, the both of them. https://t.co/gwhKTE3S6P