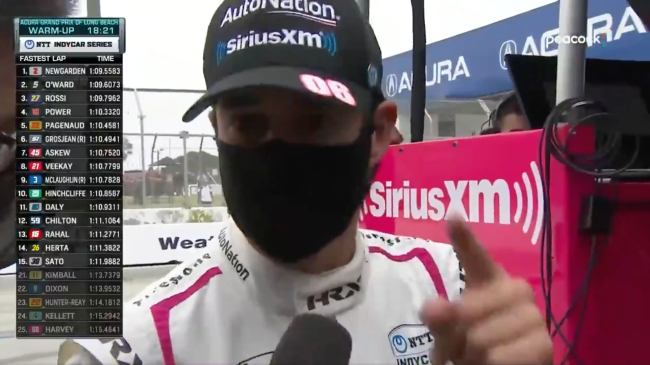 The contact occurred when Castroneves was on a flying lap about seven minutes into the warmup. Rossi exited the pits directly in front of Castroneves and held his line when the two made contact.

When the collision occurred, Rossi nearly lost control of his car after being hit in the left rear but he was able to continue. Castroneves’ damage caused him to be sidelined for the remainder of the session.

Castroneves was interviewed after the incident and lost his mind about what happened. His epic, expletive-filled rant did not hold back on how he felt about Rossi at all whatsoever.

Tell us how you really feel, Helio pic.twitter.com/KqB4EjrdLa

Rossi was equally as unhappy in response and fired direct shots at Castroneves, who also happens to be his teammate. He was able to keep his cool to some extent, but Rossi was very clearly upset in his tone and his face showed how he really felt.

Well… this race should be interesting.

Castroneves is known for showing emotion when something goes down that he doesn’t like. He is not one to mince words and Sunday’s rant rivals his (perhaps most famous) soundbite from 2020.

"24 HOURS!"@H3lio Castroneves is NOT happy with Harry Tincknell after a crash at the Bus Stop puts the Team Penske car in the garage in the @Rolex24 at @DISUpdates. pic.twitter.com/TyJAn9jPYm

Castroneves’ anger in Long Beach stemmed from what he perceived to be a lack of respect from Rossi. Considering that the two drivers are often in the same meetings, this upcoming week is sure to be rather tense.