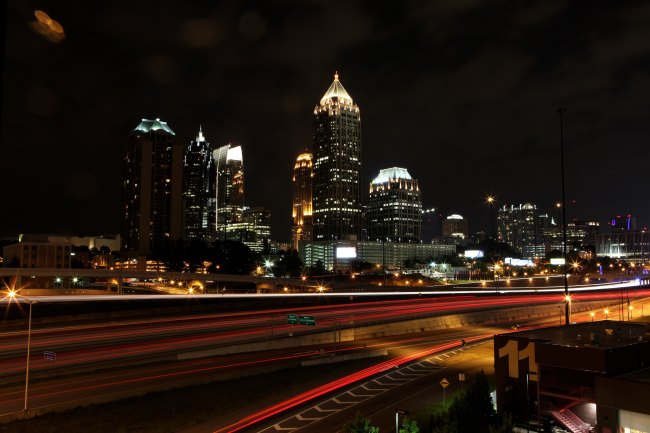 ATLANTA - JULY 17: Atlanta skyline at night as photographed from the 18th Street bridge on July 17, 2015 in Atlanta, Georgia. (Photo By Raymond Boyd/Getty Images)

Having the NBA All-Star weekend in Atlanta was probably not the best idea.

Last week, NBA commissioner Adam Silver assured people that fans would be deterred from going to Atlanta because there would be no official events being hosted by the league in the surrounding area.

Adam Silver "We don't want people to gather for events around this All-Star, there will be absolutely no social functions in Atlanta…no parties" pic.twitter.com/ohWAfD4LSo

“We don’t want people to gather for events around this All-Star. There will be absolutely no social functions in Atlanta. No ticketed events. No parties. It is a made-for television event at this point, and it’s largely in Atlanta because that’s where Turner Sports is located who will host this event … that’s why we are there, so we agree with the mayor.”

Unfortunately, club promoters have been promoting All-Star weekend parties for weeks and the city is already packed with people.

Adam Silver "There will be no parties"

The NBA has sent out roughly 200 letters with cease-and-desist orders to various party promoters in the Atlanta area that have used the league’s All-Star logo and event name in connection with unaffiliated events scheduled this weekend, league spokesman tells @NYTSports

According to people on Twitter, Instagram models have been spotted sleeping in cars and Uhaul vans because hotels are full.

Naw they in Atlanta wylin fareal, what this is a Uber Uhaul or a Uhaul Hotel Room? 😭 pic.twitter.com/UdvC6txaRJ

Oh the had a good lil time in the uhaul in Atlanta. The creativity. pic.twitter.com/P6Jpb0s6oE

“We in a Uhaul in this bitch” Atlanta All-Star weekend is different pic.twitter.com/TrobI9cxTk https://t.co/zilMMN8hJg