Why So Serie A? BroBible’s Serie A Weekend Preview – Inter Milan Vs Juventus 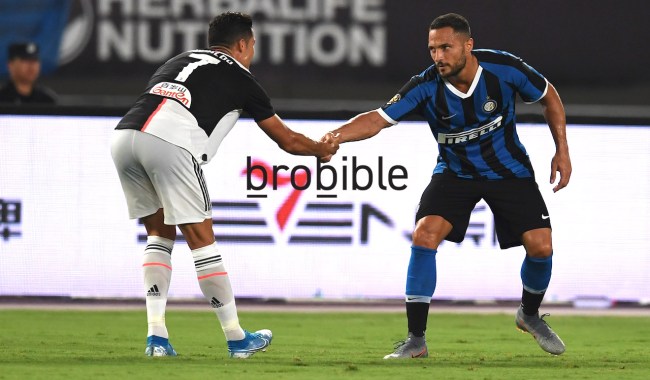 This weekend’s premier matchup features two of the most iconic clubs in world football as eight-time-defending champions Juventus head to Milan to take on Internazionale at the iconic San Siro.

Sunday’s match between these two pillars of Italian football, which kicks off at 2:45 p.m. EST, will be airing exclusively on ESPN+ in the states. Now, on to why you’re all here: the betting preview and prediction.

Featuring the two top teams in Serie A — Inter sits in first with six wins out of six, while Juventus sits in second with five wins and a draw (a draw that we predicted in this very series) — this Sunday’s matchup between these two Italian giants may prove to be crucial when it comes to who wins Serie A this season.

While both sides were involved in midweek Champions League action, Juventus has the advantage in that regard, as they not only played at home — Inter are on the road against Barcelona — but played on Tuesday, giving them a full extra day’s rest.

Still, despite their rest advantage and pedigree, walking into the San Siro and claiming three points is no easy task, especially with Serie A and Premier League-winning manager Antonio Conte now at the helm.

Yes, Juventus may be the more overall talented side — especially in the midfield — Inter Milan boast the devastating combination of one of the world’s best managers in Antonio Conte and one of the world’s best defensive units thanks to the likes of Samir Handanovic, Diego Godin, Stefan de Vrij, Milan Skriniar, Danilo D’Ambrosio, and Marcelo Brozovic.

Given the stakes involved in the match — a win for Inter would put them five points clear of Juve, while a victory for the Old Lady would see them overtake first place — and the tactical excellence of the manager involved, Sunday’s match should be a low-scoring, tight, intense affair that is ultimately decided on one or two moments.

Juventus may have the goods to nick a victory, but with Inter Milan heading into the match with the main objective of not losing, we think these two Italian giants will play to an intense draw, sending each side home with one valuable point each.