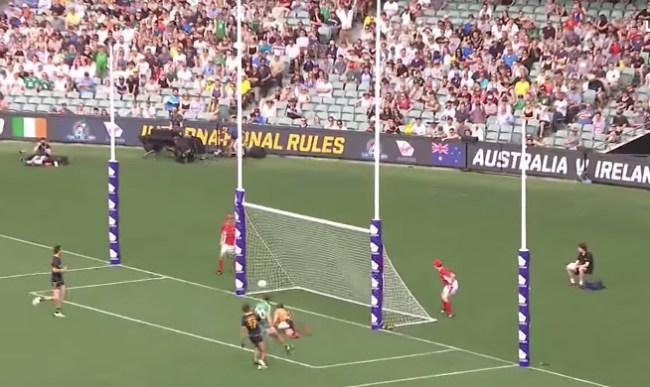 Trying to follow what’s happening here reminds me of the first time I tried to watch a Rugby match without someone explaining what was happening. This footage comes from the 2017 International Rules Series, a tournament between Australia and Ireland which kicked off yesterday (November 12) and runs through this coming Saturday (November 18).

The International Rules Series happens every couple of years and the ‘International Rules’ refers to the game itself. It is a hybrid between Australian Rules Football, a game I already don’t understand, and Soccer. I couldn’t tell you why anything is happening in this video but I’ll be damned if I didn’t watch every second of it because it’s enthralling:

More specifically, International Rules is a hybrid between Australian Rules Football and Gaelic Football. This is the 20th time this tournament has taken place but I’d never heard of it until this morning when a buddy sent me the clip above which I believe he found on Reddit, but I could be wrong about that, I just later saw this video there as well.

I really wish I had a firm grasp of Australian Rules Football because I feel like that’d help me see when the Gaelic Football elements stop and start. If you’re interested in going deep down the rabbit hole, you can find an explanation of all the rules for this International Rules sport by clicking here to head on over to Wikipedia.

It bums me out a little bit that we don’t have random ass professional sports tournaments like this here in America, with our top athletes competing in events outside of their purview.