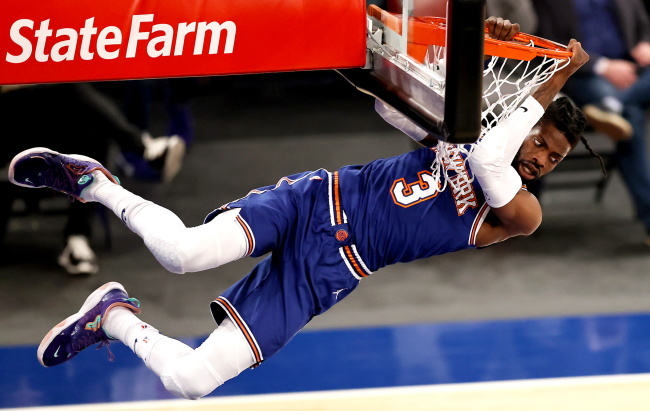 So there is justifiable reason for optimism over at 4 Pennsylvania Plaza in New York, New York.

After all, the Knicks’ .569 winning percentage last season was the best the team has put together, outside of the 2012-13 season when the team went 54-28 and lost in the Eastern Conference Semifinals to the Indiana Pacers, since way, way back in the 2000-01 season.

The Knicks begin their 75th anniversary season with a nationally televised game on ESPN against the Boston Celtics on Wednesday, October 20th at Madison Square Garden – the fifth time in franchise history that New York will begin its season at home against the Celtics.

As such, the Knicks are very excited for the 2020-21 NBA season to get rolling and to express their enthusiasm the team created a fancy new team poster with the phrase “IT BEGINS” and a completely indecipherable “KNICKS” written at the bottom of it.

Hold on, does that say, ICNICICS? Who are the ICNICICS? Who approved that font? And how did this poster get past so many eyes before it finally made its way on to the internet?

Speaking of the internet, there was no way this new ICNICICS poster was not going to be mocked from here to kingdom come.

Can’t wait to see the

WTF is that font?

The true laughing stock of the nba

Just solved the new NCIS New York’s poster riddle on who killed the Knicks. Take NCIS out of ICNICICS and you get ICIC, which stands for I see iceee 🧊. Thus confirming that Ice Trae distorted the Knicks season. #Hawks pic.twitter.com/Im06vARuol