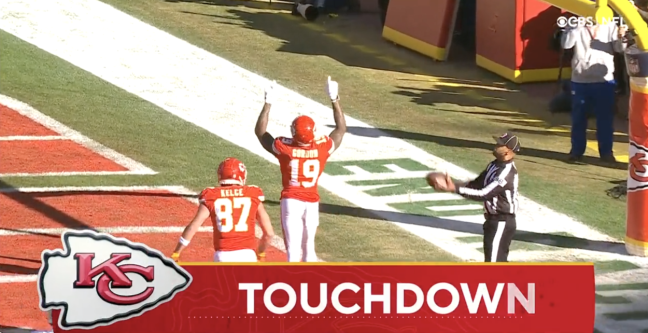 It has been a long journey for Josh Gordon, but he found the end zone once again on Sunday. The Kansas City wide receiver split out to the near sideline, went into motion, caught a screen, and punched it in from one-yard out.

Welcome back to the end zone, @JOSH_GORDONXII. #ChiefsKingdom

The 30-year-old, who was drafted in the second round of the supplemental draft in 2012, has been in and out of the NFL over the last nine years.

It has been a difficult road, but his resilience is admirable.

After being reinstated in 2016, Gordon again left the league to enter a rehabilitation facility and did not return to the NFL until 2017. The former Baylor receiver was cut by the Browns in 2018 because he was struggling to stay sober and the team believed that it did everything it could do to keep him on the right path.

And then, after a short time with the Patriots, Gordon announced he was stepping away from football to focus on his mental health.

Gordon was conditionally reinstated in 2019 but suffered an injury later in the season and then was suspended indefinitely after his violation of the NFL’s substance abuse policy. He did not play in the NFL from December 16, 2019 until he was reinstated from suspension in September 2021.

Meanwhile, Gordon proved his value in the Fan Controlled Football League and the Chiefs decided to give him an opportunity upon reinstatement. He signed to the practice squad on September 28, 2021 and was elevated to the active roster a week later.

Since then, Gordon’s touches have been limited. Even the coaching staff has said that it needs to find more ways to get him involved.

That happened on Sunday as Gordon found pay dirt for the first time since catching a touchdown from Tom Brady on September 8, 2019.

After 826 days and an open and honest struggle with substance abuse, NFL fans and former players were thrilled to see him find success once again.

Josh Gordon back in an NFL endzone.. Good for him man

It has been a difficult road for Gordon and it’s great to see him thriving.