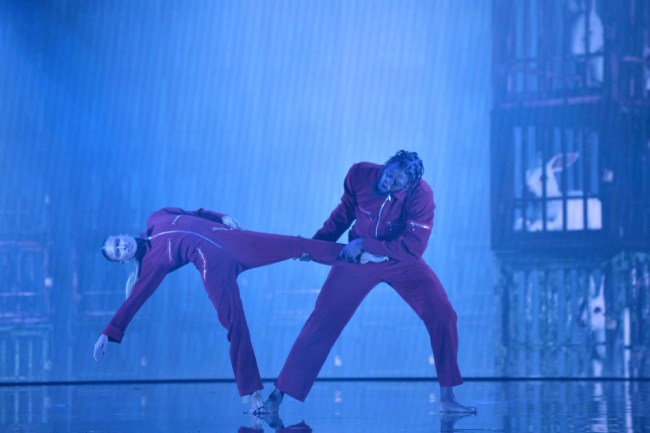 Iman Shumpert might mess around and win Dancing With The Stars. The 31-year-old former NBA Champion is one of nine remaining contestants on the show and is considered one of the favorites after his routine on Monday.

Shumpert, who is known for his musicality off of the court, dabbled in the rap game during the early 2010s and was featured alongside his wife Teyana Taylor in Kanye West’s music video for ‘Fade.’ Now, after being waived from the Nets in February, he is taking his talents to a different kind of hardwood— the dance floor.

During his most recent performance, Shumpert and his partner Daniella Karagach got a perfect score. The duo danced a contemporary number during the Halloween-themed show and it was remarkable.

In most instances, the professional dance partner on the show significantly out-shines the “star.” Not in this case.

Shumpert’s athleticism translated incredibly well to the very physical piece and he blew everyone away. He matched Karagach’s energy, flow and musicality with tremendous ease for someone who stands 6-foot-5.

Take a look at the ‘Us’ dance:

As the performance began to make waves across the internet, one of Shumpert’s former teammates took notice. Lebron James, who won a championship with the former Cavaliers guard in 2016, was all aboard the hype train.

King James was not the only person to be impressed by the routine. Jeremy Lin was loving it:

As was Dwayne Wade:

And so was Isaiah Thomas:

Iman and Daniella are currently amongst the frontrunners after their contemporary routine, alongside JoJo Siwa and Sunisa Lee. Other remaining competitors including: Olivia Jade, Amanda Kloots, Cody Rigsby, The Miz and Jimmie Allen.

Here are some of Shumpert’s other performances from this season:

The man has serious moves!