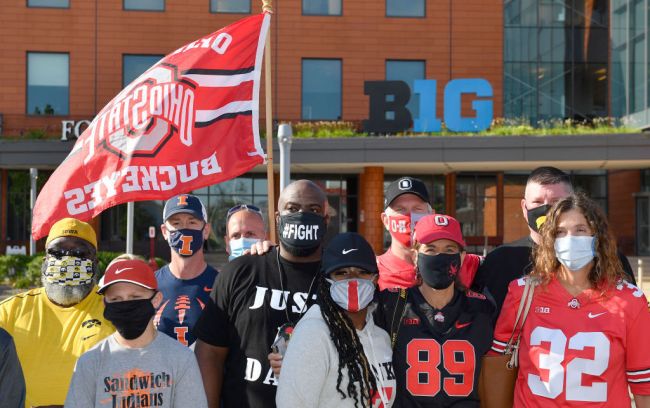 Have you heard? Big 10 football is returning. Truth be told, I’m not nearly educated enough about COVID or college football to pontificate on whether or not this is a good decision. As a college football fan and a Big 10 alumni — yes, Rutgers University is still being dragged around like a carcass in the desert sun up-and-down Big 10 country — I’m certainly excited. No boycott here, I’ll be tuning into

Sure, college football is college football, and watching the Louisiana-Lafayette Ragin’ Cajuns not only exist, but snuff Iowa State, is certainly enjoyable, but it just isn’t the same as watching Wisconsin and Michigan trade 3.3 yard carries between the 30-yard-lines on a brisk November afternoon as you crush buffalo chicken dip and Octoberfest beers. It just hits different.

Naturally, though, because nothing can happen in this country without becoming an epicenter of argument, the internet has had some #TAKES about the news of the Big 10’s return, ranging from the level-headed (such as mine and likely yours, which is something along the lines of “if it’s safe and the players want to play, so be it), to the absolutely absurd (such as USA Today calling it the “darkest day” in the conference’s history — the conference that housed Jerry Sandusky, I remind you), to the obviously trolling, such as this ticking-Twitter-timebomb-take from The Daily Caller writer David Hookstead.

I’ve spent the past 188 days fighting to save Big 10 football. Today, we accomplished the mission.

Much like the Osama Bin Laden raid or D-Day, you never know when your number will be called to serve. All you hope for is to execute your job and the mission.

We did just that.

Unsurprisingly, whether it be because they don’t understand the sarcasm or simply think this isn’t a matter to be sarcastic about, the Blue Checkmark Brigade on Twitter had tons to say about Hookstead’s tweet, with reactions registering all across the Twitter Freakout Richter Scale.

This may be the funniest tweet I've read on this site in a long time. https://t.co/WxoHK7QHrQ

This is parody, right? An attempt at satire? https://t.co/kdoA6kF19V

My number was called today as well. Wife spotted a nasty looking spider and I sprung into action. You hope you’ll react well but you never know. https://t.co/vu0hbda0As

Guys, this is clearly a joke. https://t.co/sR1JPO6jSb

You accomplished nothing other than getting some teenagers sick.

This is David. David has delusions grandeur and is seeking attention. Don’t be David. https://t.co/5DyFXU4QBU

This truly is one of the dumbest things I’ve ever seen in my life. Good lord. https://t.co/qBMTYdkOgn

serious question: is this guy joking, or is he actually comparing college football to life-or-death heroism? https://t.co/dc7lPI5PVA

what a fucking loser https://t.co/RJthMgomv3

I would personally like to say, to all the starving children in the world who read my silly basketball column today: You're welcome. https://t.co/kCtgxN8TnY

Next time someone questions whether Trump said shitty things about Veterans (he did, many times), remember that MAGA equates putting your life on the line for our country with… football.

you’d think people think things that are on pause to save people’s lives or quality thereof in the future were cancelled forever 🤦‍♀️ https://t.co/3VmdfmllZm

The entire USC Football team has Covid-19, good luck with that. https://t.co/fYhmGQfWXI

If there were a Congressional Medal of Asshattery, this guy would be first in line. https://t.co/ChGMyHikbG

Man fuck all you people who just discovered Hookstead. I’ve been following this guy since he said he was qualified to say most women lie about rape because he “personally stopped a rape.” https://t.co/k5fVtkH9EG

In case you were worried that the return of college football was going to be an absolute nightmare on the internet, congrats – you were 1000% correct! In fact, it’ll probably be even worse than you previously imagined. The Blue Checkmarks live for this shit, especially in this cursed year that is 2020. You wanted sports and politics to be kept separate? Just wait until the Big 10 kicks off a couple of weeks before the election. You’ll be better off just deleting Twitter.