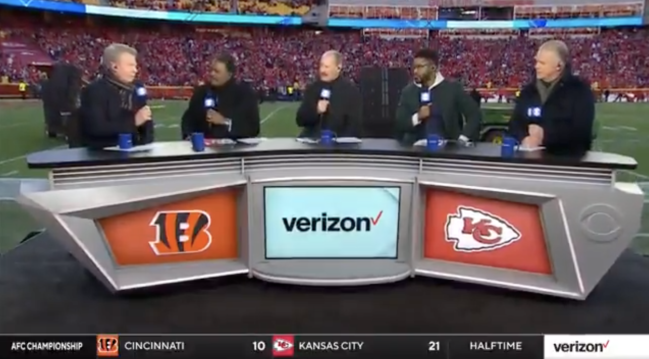 YEAH WE FANCY LIKE APPLEBEE’S ON A DATE NIGHT!!!!!

If you have not heard enough of Walker Hayes’ insufferable “hit” single ‘Fancy Like,’ you got plenty of it on Sunday. During halftime of the AFC Championship game between the Chiefs and the Bengals, Hayes performed a medley of his music in front of a sold-out crowd at Arrowhead Stadium.

CBS forgot to account for the performance and set up their broadcast desk right in front of a large set of speakers. As James Brown, Bill Cowher, Boomer Esiason, Nate Burleson, and Phil Simms tried to discuss the first half, the broadcast was incomprehensible.

While the CBS broadcast team was talking, all that could be heard was Hayes’ halftime show.

Not only were the viewers at home unable to make out anything that was being said, but the CBS crew couldn’t hear one another. Esiason was having absolutely none of it.

boomer not dealing with this walker hayes nonsense pic.twitter.com/81oQIadrdZ

Eventually, the broadcast crew just had to embrace the fact that there was no hope.

As the halftime failure unfolded, NFL fans had all kinds of reactions about both CBS and Walker Hayes.

Here are some of the best:

Did they just set up 8 big ass speakers behind the desk?! You can’t understand a word these guys are saying! #NFL #KCvsCIN #HalfTimeShow #Halftime #NFLonCBS pic.twitter.com/7upnd59ivs

Verizon trying to figure out how to remove their name from the halftime report. #HalfTimeShow pic.twitter.com/B6LJtiRqIo

Yikes, don’t think CBS realized how disruptive the Walker Hayes halftime show would be during *their* halftime show. Can’t heard a word.

More importantly: Forcing sports fans to hear MORE of the Applebee’s song should be penalized with a loss & elimination, Chiefs.

Trying to listen to this CBS halftime show pic.twitter.com/iUqkwN2J9E

Walker Hayes vs. the lads from CBS pic.twitter.com/7dVjw9fNir

and we go live to your CBS Halftime Report during a full Walker Hayes concertpic.twitter.com/aM6NVcrGkf

Walker Hayes vs the CBS halftime crew is a bloodbath! 😂 #AFCChampionship pic.twitter.com/I7j5BDVBOv