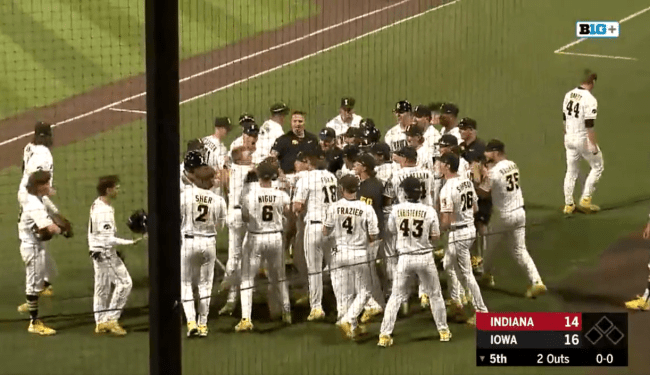 Most people who know anything about baseball would think that a 11 run lead in the fourth inning is pretty safe. In fact, the team with the 11 run lead’s expected win probability is somewhere around 99.9%.

On Thursday night in Iowa City, that 0.1% reared its ugly head.

After jumping out to a 13-2 lead in the top of the fourth inning, the Iowa Hawkeyes went on a run that has rarely been seen before in college baseball, outscoring the Hoosiers 28-3 to take home a 30-16 win.

The star of the show for the Hawkeyes was center fielder Kyle Huckstorf went 6-for-7 with three home runs and 12 runs batted in.

As if that wasn’t crazy enough all by itself, Huckstorf hit not one, but two three-run homers in the fourth inning.

The last 3 at bats for Kyle Huckstorf

The best and most fun game I have ever played

“This is going to stick with me forever,” he said after the game. “It will be stories that live on forever and I’ll have fun with it.”

Huckstorf added, “Right when we got here in BP, we said it was going to be a good day to hit. We said let’s go put up a bunch of runs… we put up 30.”

“You don’t see many like that, but that’s why you keep playing,” Iowa head baseball coach Rick Heller said of the historic comeback win. “Indiana came out swinging and jumped on us fast. We were down early, and we talked as a group after the first inning that [pitcher Adam] Mazur picked us up a lot this season, today the offense needs to pick him up.

“We had guys that had phenomenal nights offensively. Huckstorf was incredible. You don’t see that, that’s a once or twice a career-type game. It came in a game that was meaningful against a quality opponent.”

Smashed Thursday's 30 runs into less than 60 seconds of video. pic.twitter.com/o5Rjj0vupn

Numerous Big Ten and school records were broken in the chaos. Huckstorf’s 12 RBIs set a Big Ten and Iowa record. Sophomore Michael Seegers had five walks, breaking the Hawkeyes’ single game record. The 30 runs were the second-most scored by Iowa in a single game and the most in a Big Ten game in school history. The 46 combined runs are the most in a game in Iowa baseball history.

Oh yeah, the redshirt sophomore also made this catch, beginning the turnaround in the game for Iowa.