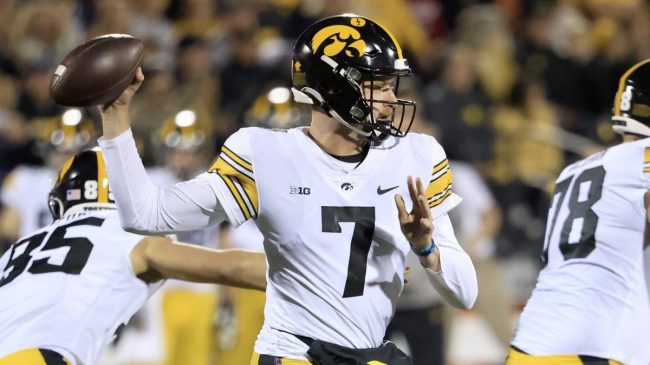 At this point, it’s not even fun to pile on Iowa Hawkeyes quarterback Spencer Petras. Petras, a senior, has been downright horrific for the Hawkeyes. In turn, Iowa has been similarly horrific on offense.

In fact, Kirk Ferentz’s refusal to make a change at quarterback has become a running joke this season in the college football world.

The Hawkeyes are 3-3 on the season and through six starts, Petras has somehow thrown just two touchdowns against three interceptions. So unsurprisingly, Iowa went into Columbus as massive 30-point underdogs against second-ranked Ohio State.

And, also unsurprisngly, it took just one play for Petras to throw an interception that had college football fans completely befuddled.

THE FIRST PASS OF THE GAME IS PICKED OFF BY @OHIOSTATEFB 💪😮 pic.twitter.com/HLtIhq6930

Fans were well and truly baffled by what Petras was trying to do. But the questions weren’t just for him. They wondered why Iowa continues to run him out there as well.

Petras is so bad… why do you keep playing him?

Why do we keep rolling him out left?

The definition of insanity is continuing to do the same things and expecting different results.

At this point, you can't fault Spencer Petras. He is who he is. The Iowa coaching staff is to blame for this offense's ineptitude and reluctancy to change QBs.

Iowa QB Spencer Petras has thrown one pass so far and has a -200 passer rating.

Honestly, it just feels like some sort of sick, twisted punishment at this point.