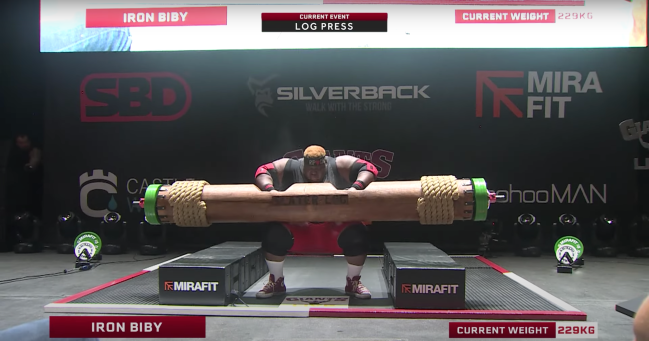 Cheick Ahmed al-Hassan “Iron Biby” Sanou is one of the strongest men on the planet and on Saturday, he brought an entire stadium to its feet. He defended his title as as the reigning World Log Lift champion and broke a world record in the process.

Biby’s effort took place at the SSE Hydro Arena in Glasglow, Scotland in front of a packed crowd. And while his lift was impressive, his story and celebration might have been even better.

As a child, Biby was bullied for being overweight. By the time he was nine, he had become accustomed to being made fun of by his much smaller classmates in Burkina Faso.

He endured the abuse without confrontation until his teenage years. It was at that point that he snapped and discovered his strength.

Biby pushed one of his tormentors and ended up tossing him across the room. The bully never bothered him again.

Nevertheless, his weight loss remained a priority. He completed his secondary education in Canada and quickly realized that being big and strong can be endearing qualities.

The 21-year-old entered his first powerlifting competition in 2013 and won. It was the birth of “Iron Biby” and started his career as a professional lifter.

A great look at his full story can be found HERE.

Since then, Biby has won quite a few competitions and two-peated as the World Log Lift champion in 2018 and 2019.

After the competition was cancelled in 2020, he returned to defend his title over the weekend with extra motivation. Biby’s father recently passed away and he was competing to honor him.

In addition, he set out to break a world record in the log lift. The record of 228 kilograms, set by Zydrunas “Big Z” Savickas of Lithuania, had held strong since 2015.

Biby walked up to the log, the crowd roared, and Biby threw 229kg over his head. World record smashed. Title defended.

To celebrate, the 6-foot-2, 449-pound champion proceeded to lay down a cartwheel with the utmost grace. It might have been more impressive than his lift itself.

No, that’s not true… Look at this (world’s strongest) act of sheer, brute strength:

Biby dedicated the win to his father in the post-lift interview and there was not a dry eye in the building. What a guy, what a story, what a lift!