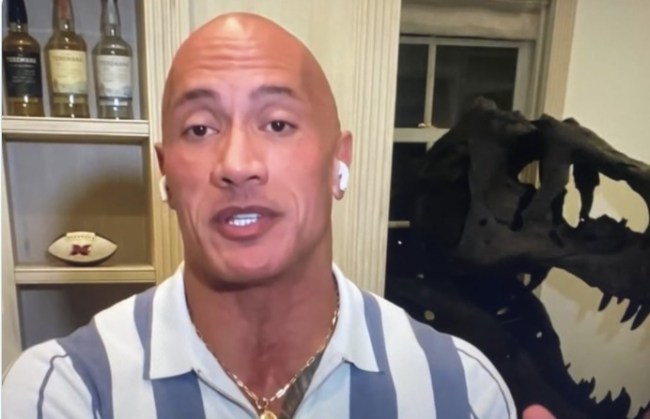 During his appearance on the Manningcast, fans noticed The Rock had a huge T-Rex skull on display in his house.

So are we just not gonna talk about the dinosaur behind The Rock or… #ManningCast pic.twitter.com/F9izaBdMEi

When Eli Manning asked about the skull, The Rock said it was named “Stan,” and it’s the most complete T-Rex skull ever found.

“I got a T-Rex skull. Yes, that’s Stan. As a matter of fact, so Stan is the most complete T-Rex skull ever found by a young paleontologist and his name was Stan, so this T-Rex head was named after him.”

“Pretty cool and badass isn’t it.”

Fans immediately discovered that the original “Stan” was sold for $31.8 million to an anonymous buyer during an auction in October 2020.

Wait. Does this mean The Rock spent $31.8 million on that T-Rex skull? https://t.co/IUA7hshJbv

More than three decades ago in South Dakota, an amateur paleontologist named Stan Sacrison discovered a titan of the ancient Earth: the fossil of a mostly complete, 39-foot-long Tyrannosaurus rex. Nicknamed “Stan” after its discoverer, the beast was excavated in 1992 and has long been housed at the private Black Hills Institute of Geological Research in Hill City, South Dakota. But even if you’ve never been there, chances are good that you’ve seen this particular T. rex. Dozens of high-quality casts of its bones are on display in museums around the world, from Tokyo to Albuquerque, New Mexico.

Now, an auctioneer’s hammer has thrown Stan’s future into question, with the dinosaur bones sold off to the highest—and, so far, anonymous—bidder, stoking fear among experts that this beloved T. rex may be lost to science.

On October 6, the London-based auction house Christie’s sold the T. rex for a record $31.8 million, the highest price ever paid at auction for a fossil. The previous record was set in 1997 with the sale of “Sue,” a largely complete T. rex dug up by the same South Dakota institute and eventually purchased by the Field Museum of Natural History in Chicago for $8.36 million (equivalent to nearly $13.5 million today).

Others noted that The Rock might own a replica of Stan which sell for much less.

OK I figured out The Rock’s T. Rex skull.

It’s highly likely that The Rock owns a replica of Stan but The Rock is so rich that it would be believable that he owns the real deal.