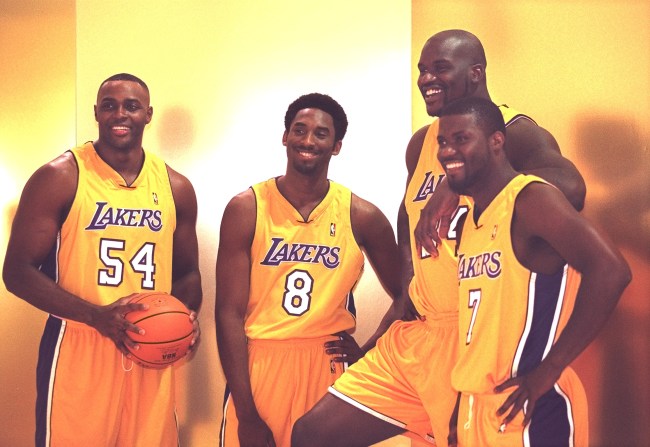 Isaiah Rider is probably best-known for being a key member of the stacked UNLV Runnin’ Rebels during the early-90s, which propelled him to being drafted No. 5 overall by the Minnesota Timberwolves in the 1993 NBA Draft. While Rider’s career sort of spun downwards from there due to off-the-court and disciplinary reasons, and he never lived up to the billing of becoming a superstar, he did end up winning an NBA title with the Los Angeles Lakers in 2001 as a role player.

Joining forces with guys like Shaquille O’Neal and Kobe Bryant on the Lakers that season, Rider was joining a team looking to defend its first of three-straight championships. But, as we all now know, the dysfunction in the locker room was prevalent, with Shaq and Kobe already fighting for supremacy to be billed top dog. And while we’ve had plenty of reminders about the feud between O’Neal and Kobe, Isaiah Rider recently described just how F’ed up things really were.

While talking to former NBA players Stephen Jackson and Matt Barnes on their All The Smoke podcast, Rider described a time that Shaq actually offered to pay him $10,000 to start a fight with Bryant in practice — which he didn’t initially believe. Making this more interesting? The fact that the proposed deal came just three days into Rider joining the Lakers.

J.R. Rider telling the story of joining the Lakers and Shaq letting him know he has $10,000 cash if Rider fought Kobe is absolutely hilarious. Better though is Jackson's response. (h/t All the Smoke) pic.twitter.com/FBME9Rf5Kp

“When I first get to the Lakers, Shaq tells me, if you and Kobe get into it, it’s 10 G’s in the locker. This is three days into practice. I’m like, ‘Man, come on, you playing, man.’ ‘There’s 10 G’s in one dollar bills, if you ever get into it and you handle your business, grab that’ I couldn’t believe it, I’m like ‘Man, these boys are crazy, bro.’ But this is my thing, I would’ve been off that team so fast if I laid a hand on that man.”

Man, what in the hell was really going on between Shaq and Kobe in the early-2000s? Putting a small bounty over Bryant’s head for a teammate to start a fight is next level bullshit, but, as Isaiah Rider put it, had he actually followed through with O’Neal’s request, he knew he would’ve probably gotten cut fast AF.

Still, the fact that this was even an idea that Shaq entertained goes to show just how threatened he was by Kobe. Luckily, the two made up prior to Bryant’s tragic death and were able to playfully poke one another about their wild feud decades ago.