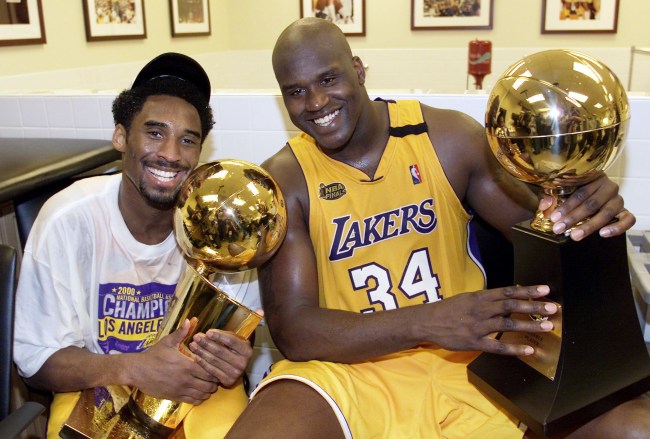 Kobe Bryant and Shaquille O’Neal led the Lakers to win three consecutive NBA championships from 2000 to 2002, and they won those three titles despite the Lakers superstars engaged in feuds throughout their years together. Kobe has reignited the war of words with Shaq this week by calling O’Neal “lazy.”

Kobe recently did an interview with Patrick Bet-David for Valuetainment, a YouTube channel dedicated to entrepreneurs. At the PHP Agency Convention in Las Vegas, Bet-David asked Bryant: “Who would Shaq be if he had your work ethic?” Kobe quickly replied: “He’d be the greatest of all-time. He’d be the first to tell you that. For sure.”

“This guy was a force like I have never seen. I mean it was crazy,” Kobe said of Shaq. “He was mean, he was nasty. He was competitive. He was vindictive.”

“I wish he was in the gym,” Mamba said of Shaq’s lack of work ethic. “I would’ve had 12 f*cking rings.” Bill Russell is the NBA player with the most championship rings after winning 12 titles.

Kobe pointed out that these are opinions that he has personally told Shaq to his face. “Me and Shaq sit down all the time and I say, ‘Dude if your lazy ass was in shape…’ I tell him all the time.”

Shaq was traded from the Lakers to the Miami Heat in 2004 because the two stars hated each other. Then Kobe would win two more NBA championships with the Lakers. Instead of winning 12 rings, Bryant ended up with five championship rings, one more than O’Neal and one less than Michael Jordan.

Kobe also said that there would be fewer feuds between him an O’Neal. “I don’t deal with people that don’t commit at that level but then act as if they do. I don’t deal with that. I don’t. This is real sh*t.” Kobe said “a lot of our contention came from” Shaq’s conditioning.

Kobe also talked about the time when he was 19-years-old and got into a fistfight with Shaquille O’Neal. “Rick Fox, all my teammates thought I was absolutely crazy the day me and Shaq got into a fistfight,” Kobe said. “After that day, they were like, ‘okay Kobe you’re certifiable.'”

“I’m not backing down,” Kobe said of his fight with O’Neal. Shaq allegedly told Kobe that the fight was a “big turning point.” Kobe said Shaq said that “nobody was really stepping up or challenging him. “When he saw me challenging him he said, ‘this kid’s crazy.” “That was the beginning of our relationship,” Kobe said in the interview.

You can watch the entire hour-plus interview with Kobe Bryant below.