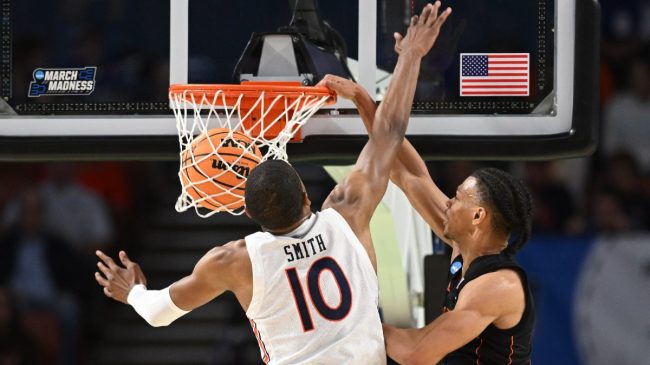 We’ve got another college basketball upset on our hands.

Tenth-seeded Miami took down No. 2 seed Auburn with a dominant performance. The Hurricanes never trailed in the contest, scoring the first four points of the game and never looking back.

After taking a one-point lead into the half, Miami absolutely exploded in the second half. The Hurricanes outscored the Tigers 46-29 in that second session.

Much of that impressive run was due to the play of guard Isaiah Wong.

The sophomore scored a game-high 21 points. He shot 8-of-18 from the field while bringing down six boards. He was easily the most valuable player for the Hurricanes in that massive upset victory.

While that shooting performance had folks talking, it was one play in particular that made headlines.

It was Smith who was putting opponents on posters his last time out, but this time, the SEC Freshman of the Year was on the losing end. He may very well be the No. 1 overall pick in the upcoming NBA Draft, but that didn’t scare off Wong.

That slam had folks on social media hyped up.

NO REGARD FOR HUMAN LIFE ISAIAH WONG MY GOD

ISAIAH WONG IS AN ANIMAL https://t.co/wZDVFxSRGD

Isaiah Wong just put the No. 1 pick in the draft on the wrong side of the poster! 🤭 pic.twitter.com/dM2jujx3om

Anybody check in on Jabari Smith???

Hoping his stock didn’t fall too much from Isaiah Wong stuffing him in a locker.

Isaiah Wong with a poster 👀

Jim Larranaga on the first half & Isaiah Wong's dunk, Miami up 33-32 pic.twitter.com/EIlQ7wVh7h

Wong was hoping he’d get the opportunity to throw it down on Smith. When asked about the jam after the game, Wong responded, “I was like ‘Ohhh I hope he jumps with me.'”

"I was like 'Ohhh I hope he jumps with me'" – @CanesHoops stud Isaiah Wong recounts his cram over Jabari Smith pic.twitter.com/yEagJreqEl

That dunk will be sure to stay on NCAA Tournament highlight reels for years to come. Wong and the Hurricanes will move on to the Sweet 16, where they’ll face 11th-seeded Iowa State.