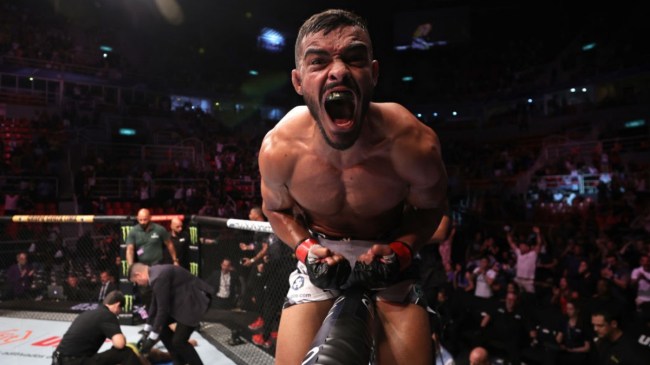 Today’s UFC pay-per-view card from Brazil features a couple of brothers making their debuts in the organization after they both earned contracts on the same episode of Dana White’s Tuesday Night Contender Series back in September.

Both were matched up with tough opponents for their debuts, but were hoping to repeat their success from 4 months ago.

Ismael Bonfim got their night off to a great start.

Bonfim was the first of the brothers to step into the Octagon today and he had to take on Terrance McKinney, who had built a pretty impressive highlight reel early in his UFC career.

The expectation was that Bonfim would have to weather an early storm from McKinney and then turn it on after the initial burst.

Tonight, he flipped the script.

Bonfim came out firing from the opening bell. He immediately took over in the striking battle and prevented McKinney from having any success in the wrestling as well.

He clearly took round 1 thanks to his success on the feet.

That continued in round 2. Bonfim kept landing on McKinney and seemingly left him without answers on how to find any offense of his own.

A little less than halfway through the second round, Bonfim landed a shot that knocked out Mckinney’s mouthpiece. Shortly after, he landed one of the most devastating flying knees you’ll ever see.

You can’t ask for a much better UFC debut.

Bonfim put it all on display in just 7 and a half minutes in the cage. He showed dangerous striking and solid grappling and added an absolute statement knockout.

Ismael Bonfim has quickly established himself as a prospect to watch in the UFC’s lightweight division and will now have plenty of fans excited to see who the organization matches him up with next.