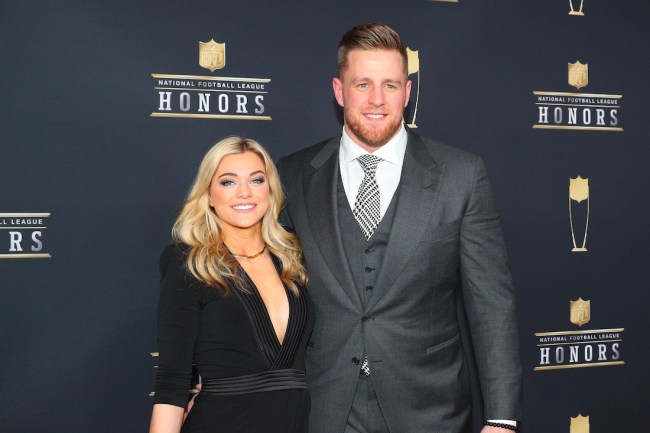 When most people think of J.J. Watt, they probably imagine a beast of a defender who spends most of his time knocking the snot out of opposing quarterbacks. While that’s generally true, we’ve all seen indications that the three-time Defensive Player of the Year also happens to have quite the soft side.

From Watt’s efforts in raising more than $40 million for the city of Houston back in 2017 to help with hurricane relief efforts, to watching him play catch with kids in the stands prior to games, J.J. might actually be a big softy deep down. Standing 6′5″ and weighing 288 pounds, at first glance, that’s probably not what most people would assume, though.

And if anyone needed another example of J.J. Watt being this way, look no further than a recent tweet he posted about a 2014 exchange with now-wife Kealia Watt.

The story goes like this: In 2014, the Houston Dash of the National Women’s Soccer League selected Kealia with the No. 2 overall pick, which was the franchise’s first ever draft pick. Given his stardom at the time from playing with the Houston Texans, J.J. tweeted to her to welcome her to the city. Here’s the exchange.

Thanks for pointing this out @lllaciminos

Turned out to be a great start in many ways, eh @KealiaOhai?

As the Twitter user Liam Collins pointed out, the exchange between the now-Watts is so wholesome. You want to talk about fate, well, here it is, as this was (presumably) the first time J.J. and Kealia had spoken. I can’t confirm that, but it sure seems like it given the context.

As somebody who really believes in manifesting things and that everything happens for a reason, this whole J.J. Watt-Kealia Watt Twitter exchange sort of supports that theory. Sure, nobody knew what was to come when the now Arizona Cardinals defender sent a simple tweet welcoming Kealia to Houston, but, fast-forward five years to 2019, and the two were married. That’s pretty wild — and really cool.