J.J. Watt Revealed What’s Been Done With The $41.6 Million He Raised For Hurricane Harvey Relief And The Stats Are Staggering 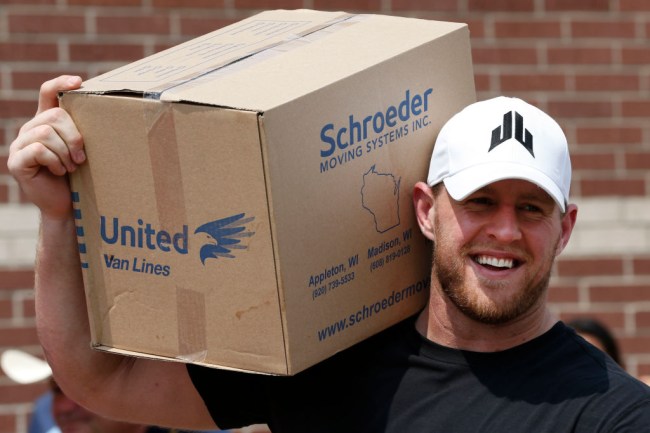 Last year, millions of people were impacted by Hurricane Harvey, especially those in the Houston area who bore the brunt of the impact of the storm.

Thankfully, people were quick to rally to help those in need, whether we’re talking about the heroes with their feet on the ground (or, in the case of a UFC fighter, a giant truck) or the companies that stopped brewing beer to ensure people in the area had access to clean drinking water.

Donations began to fly shortly after the storm hit, with celebrities and organizations like the Houston Astros opening their wallets to help provide relief.

However, there aren’t many people out there who deserve more credit than J.J. Watt, who started a fundraising campaign that quickly skyrocketed into the millions as he leveraged his celebrity to take care of the city he currently reps.

Since starting the fund, Watt has repeatedly provided updates about how the money is being put to good use.

Quick update of where we're at right now… pic.twitter.com/a105oYRv3A

Now, one year later, Watt has revealed he helped raise a staggering $41.6 million for Hurricane Harvey relief and hopped on Twitter to show the amazing impact it’s had on the many people are still rebuilding their lives to this day.

Here’s a list of what’s been accomplished so far (although it’s clear Watt and everyone else aiding in the recovery still have a lot of work to do):

“While a great deal has been accomplished in the past 12 months, there is still much work to be done. Moving forward, there will be more of the same, as we continue to work with our incredible nonprofit partners to provide as much help and support as we possibly can for those affected by Harvey I cannot thank everyone enough for your support and generosity.

You have truly provided an unbelievable example of what the human spirit is capable of accomplishing. Every time that I am fortunate enough to witness someone step back into their home for the first time or a child run around on the playground again, I am reminded of the generosity of strangers that helped make it all possible.

Thank you and never stop spreading the positivity! #HoustonStrong”

I’m starting to think Watt might be a pretty good dude.