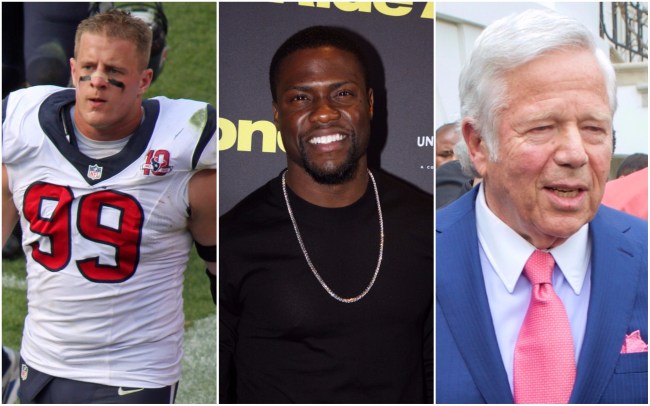 We have seen heroes make courageous rescues in Houston after Hurricane Harvey has made landfall and caused cataclysmic flooding in the area. The devastating catastrophe has already inflicted so much damage whether it be destroying houses, causing loss of life, or displacing hundreds of thousands of families. The unbelievable calmaity is estimated to cause $30-$100 billion in damage. J.J. Watt, Kevin Hart, and Robert Kraft are stepping up to make generous donations to help those in need.

Watt, who was drafted by the Houston Texans in 2011, announced that he has set up a fundraiser to help victims of Hurricane Harvey. Houston Texans defensive end posted a video on Twitter where he announced he will donate $100,000 to the people of Houston.

Recovery efforts from Hurricane Harvey will be massive.
We must come together to help rebuild our communities.https://t.co/SR6DmnNbyM pic.twitter.com/iiMsG2i4dl

“I’ve set up a fundraiser so that we can raise as much money as possible to help our communities and the families of our great city rebuild,” Watt said. “Any donation that you can spare, no matter how large or small, no matter what city or state you live in, is greatly appreciated. We will come out of this stronger than ever. We are Texans.”

At time of publication, Watt had raised over $650,000, including $50,000 from new Houston Rockets point guard Chris Paul.

The generosity of @CP3's $50k donation is actually what put us over the $500k mark. Phenomenal stuff from donations both large and small.

You can donate HERE.

Kevin Hart not only gave to the Hurricane Harvey relief effort, but also shamed fellow celebrities into giving money. Hart donated $25,000 and started the #HurricaneHarveyReliefChallenge, where he called out his friends Dwayne “The Rock” Johnson, Steve Harvey, Chris Rock, Dave Chappelle, Jay-Z, Beyonce, Justin Timberlake, and Jerry Seinfeld to donate to the victims of the disaster in Texas.

Robert Kraft uped the ante big time in Hurricane Harvey donations by making an extremely generous $1 million contribution to the relief effort. “Houston is a special city to our family and our organization,” Kraft said in a statement. “The New England Patriots and our fans have celebrated two of our franchise’s greatest and most memorable moments in Houston.” The New England Patriots owner gave $1,000,000 to the American Red Cross.

To help those affected by Hurricane Harvey, you can make a donation to the Red Cross by going HERE, call 1-800-RED-CROSS or text HARVEY to 90999 to make a $10 donation.

Help those affected by #HurricaneHarvey. Visit https://t.co/IwTsENcx2z, call 1-800-RED CROSS or text HARVEY to 90999 to make a $10 donation. pic.twitter.com/r4qSn8byXj