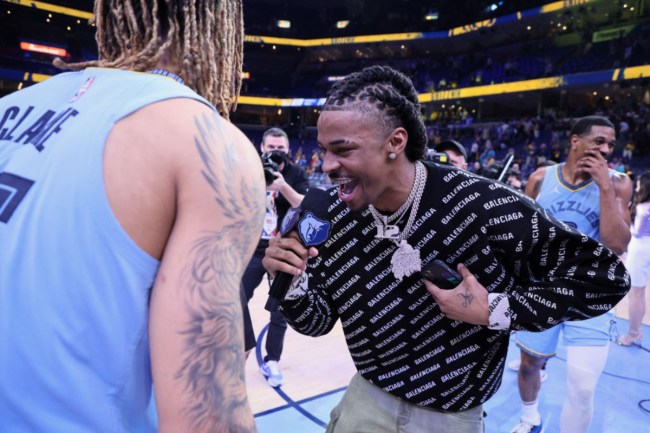 There were plenty of people that thought the Memphis Grizzlies would win Game 5 on their home floor to extend their series against the Golden State Warriors on Wednesday night. Nobody, however, saw the Grizzlies winning the game by a whopping 39 points, but that’s exactly what happened.

The Grizzlies put on an absolute clinic against a sleepwalking Warriors team, and they did so without Ja Morant on the floor.

While Morant was stuck on the bench dealing with a bone bruise in his right knee, he still had a night to remember.

After the game, with teammates Brandon Clarke, De’Anthony Melton, and Jaren Jackson Jr. being interviewed by various networks, Morant said “I’m a proud teammate” before grabbing the mic in front of Clarke and starting a “Grizz in 7” chant inside the arena.

Memphis put up 77 points in the first half alone and led the game 119-67 at the end of the third quarter. Golden State played the entire fourth quarter without a single starter on the floor, finished the game with 22 turnovers, and managed just 80 total field goal attempts.

Tyus Jones, Desmond Bane, and Jackson Jr. each had 21 points for the Grizzlies in the must-win game.

In order for Morant’s prediction to have a chance to come true, the Grizz will have to win in San Francisco on Friday night to force a Game 7 in Memphis.