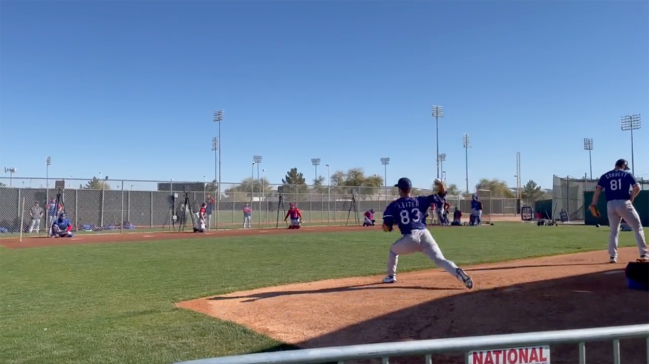 Although the MLB is currently in the middle of a lockout, that is not stopping Jack Leiter from getting work in with his new team. After being drafted No. 2 overall in the 2021 MLB Draft by Texas, Leiter is in Arizona for early spring training and throwing cheddar with the Rangers.

Leiter, who spent the last two seasons at Vanderbilt, compiled a 13-4 record with a 2.08 ERA in 125.2 innings pitched during college. A POV video of a batter taking his fastball up and in is absolutely terrifying and it makes a lot of sense why hardly anybody was able to hit him.

During the summer and fall, the 21-year-old stayed in Nashville to keep training in the Commodores’ facility with fellow MLBers who were getting work in during the offseason. Now, while those other players are forced to wait on a league start date, Leiter is able to work with the Rangers during the lockout because he is not on Texas’ 40-man roster and reported to spring training last month.

Since then, he has already impressed with his lower body strength and ability to pump gas. In addition, the first video of the rookie in his new number shows that he is as advertised.

Over the weekend, Leiter really put on a show.

For the first time since his arrival, Leiter took the mound against some of the other prospects in the Rangers’ system. One of which carries an extremely notable name.

Luisangel Acuña is the 19-year-old little brother of MLB superstar Ronald Acuña Jr. and the No. 8 prospect in Texas’ system. He played rookie ball in 2019 and single A last season, but is set to rise quickly to the Bigs over the next few years.

On Friday, he took two at-bats against Leiter and went 1-2 against his teammate— kind of. In the first at-bat, Leiter threw straight cheddar to ring up Acuña swinging.

Leiter also got the team’s No. 26-ranked prospect to go down with a hack.

Not long thereafter, Acuña got his revenge. Again, kind of.

During his second at-bat, Acuña put a ball into play off of Leiter, but it would have probably resulted in a routine 6-3 out if there were fielders playing defense.

Acuña puts the ball in play in his second at bat (though, likely right to the imaginary shortstop) pic.twitter.com/6SKYjWn4Aw

After getting some work in against live batters over the weekend, Leiter was back to perfecting his craft on Tuesday. He threw a bullpen session alongside some of Texas’ other top arms and looked like he always does — cool, calm, collected, and dominant.

some guy named Jack throwing a bullpen. idk if you’ve heard of him pic.twitter.com/SJqefOIE83

Should the MLB figure itself out in the coming days or weeks, Leiter will be joined by Major League bats and arms for the official Spring Training. It will be very interesting to see if he can carve up professional bats right out of the gate or if it will take him some time to develop into the superstar that he is destined to become.

More than likely, it will be the latter, and Leiter will work his way up through the minor league system this year with hopes of making his big league debut as early as 2023.