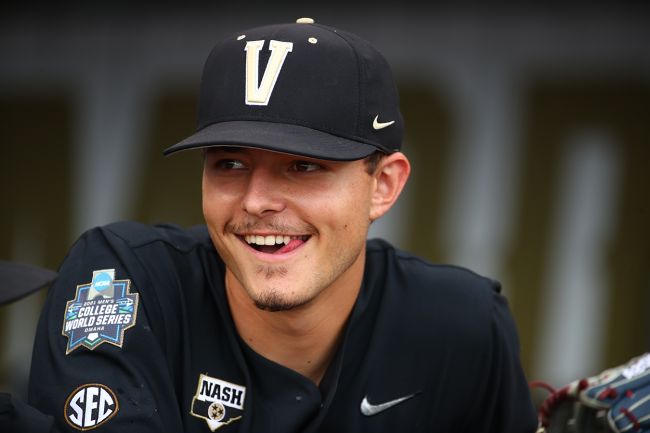 Although the MLB is currently in the middle of a lockout, that isn’t stoping Jack Leiter from putting in the work. The 21-year-old showed up to Texas’ team facility in Surprise, Arizona for an early spring training and he looks to be as advertised.

Leiter, who was drafted No. 2 overall in the 2021 MLB Draft, is not on the Rangers’ 40-man roster. As a result, he is allowed to workout during the lockout, unlike many of his big league (and some minor league) counterparts.

A video of his first throwing session on the mound went viral earlier this week and not only did his mechanics look great, but his legs looked absolutely massive. He looked like he could rival Saquon Barkley or A.J. Dillon in terms of quad size.

For some reason, the Rangers have since deleted the video.

However, Texas recently posted a new video of Leiter throwing to a live batter and he was throwing straight heat. His lower body looked strong, his motion was as smooth as ever and the cheddar was nasty.

Leiter appears to be settling in just nicely at his team’s facility in Arizona, surely hoping that the MLB will get the season started sooner than later. In the meantime, he is continuing to hone his craft, just like he has all offseason.

During the 2021 college baseball season, Leiter was dominant. POV video of a batter taking his 98 mile per hour fastball up-and-in looks absolutely terrifying.

After being drafted with the second pick, Leiter stayed at Vanderbilt during the fall. The Commodores have built an “alumni locker room” that allows former players, current big leaguers and their friends to come back and train in Nashville.

Leiter chose to stay and train with players on the next level.

In a recent interview with The Athletic, Leiter explained why he chose to stay.

“There’s a pro locker room. It’s actually very nice. So any given day, you go in late morning, in the fall, anytime in the offseason, it’s like an All-Star team in there. You’ll see big-leaguers — not just guys who went to Vandy, either — it’s a bunch of different guys working out, using those facilities. So I had catchers to throw to, I had the weight room to work out in. I had everything I needed and more. And I feel like it was a very productive fall, working on what I needed to work on.”

Among the big-leaguers who were in town this fall were Tony Kemp, Mike Yastrzemski, Kyle Wright, Adam Frazier, Bryan Reynolds, Jacob Stallings and Curt Casali. While there, he worked with those guys to perfect his craft and learn first-hand what it takes to make it in the MLB.

“(During the summer) I built up for a trip out to Arizona to throw in the pitching lab (the Rangers) have out there, kind of get all of my biomechanics measured. I thought that was really helpful as well. And then I just worked on a few different things in terms of my pitch repertoire and fine-tuning that … there were some small mechanical shifts that I think had to be made in terms of the way my body was moving. The top of my leg lift, as I drift down the mound, kind of just to be more directional to the catcher. Sometimes my glove shoulder can open up a little bit earlier than I would like, so keeping that closed a little bit, but it’s more just fine-tuning mechanics and also pitch repertoire.”

Now he is in Arizona putting what he learned to the test.

The video from Leiter’s throwing session in Arizona, though short, is promising. He is expected to be an ace for years to come once he is ready and it’s not hard to see why.

In all likelihood, Leiter will need at least one year of development on the minor league level. It is unclear as to what that looks like, but the earliest that he could make his debut in Arlington seems to be 2023.

Given how good that he is and how MLB-ready he is considered, that is not a reach. However, the Rangers will have to be sure not to rush him so that he can polish his craft properly and be ready when it’s time to step onto the mound for his big league debut.