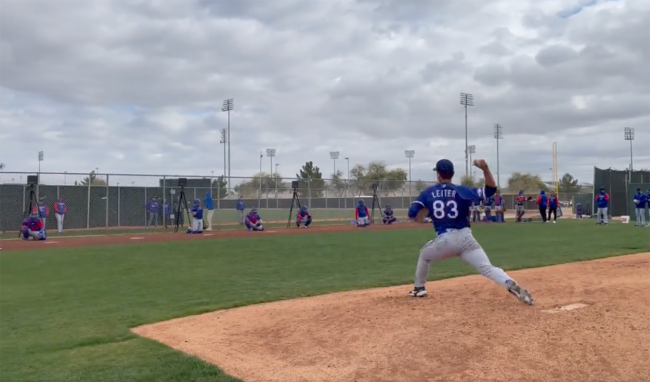 When Jack Leiter was drafted No. 2 overall in the 2021 MLB Draft, the expectation was that will become the future of the Texas pitching rotation for years to come. Although he might need some time to develop on the professional level, his ceiling is as high as any prospect in recent years.

Leiter spent the last two seasons at Vanderbilt and compiled a 13-4 record with a 2.08 ERA in 125.2 innings pitch. A POV video of a batter taking his fastball up and in is absolutely terrifying and it makes a lot of sense why hardly anybody was able to hit him.

The 21-year-old pumps close to 100mph with his fastball and has a curveball, slider, changeup and cutter in his arsenal. If/when he is able to adjust to Major League hitters, Leiter is going to be a problem on the bump.

Although the MLB is currently in the middle of a lockout, that is not stopping Leiter from getting in work with his new team. He arrived in Arizona last week for early spring training and already looks as advertised.

The Leiter hype train has officially left the station.

Leiter, who was drafted No. 2 overall in the 2021 MLB Draft, is not on the Rangers’ 40-man roster. As a result, he is allowed to workout during the lockout, unlike many of his big league (and some minor league) counterparts.

The Rangers posted a video of their first-round pick throwing to live batters and he was pumping gas. On Tuesday, MLB.com reporter Kennedi Landry posted a new video of Leiter throwing in Arizona.

It was the first look at Leiter in a Rangers uniform and it appears that he will be wearing No. 83 this spring. In the video, his mechanics are on-point.

nothing like a Jack Leiter bullpen to start the morning pic.twitter.com/nYNAwWNA9O

Leiter’s throwing motion has always been out of textbook. It is exactly what you would want a pitcher to look like when he is pitching.

However, even though it was just one video of one throw from a bullpen session, there is one important takeaway from Landry’s video. Leiter’s torso starts to rotate before he plants his foot.

However, early torso rotation can sometimes cause problems with shoulders, labrums and elbows. Pitchers like Stephen Strasburg and Mark Prior have struggled with it throughout their careers.

Surely if it is noticeable in one video from one bullpen, then the Rangers have also noticed. That is why Leiter is there— to get with a professional staff and work out the kinks.

As for now, he looks exactly as advertised. Leiter looks like he could be a dominant ace down the road, but has to acclimate to the MLB and could be well-served by a year or two in the minor leagues.