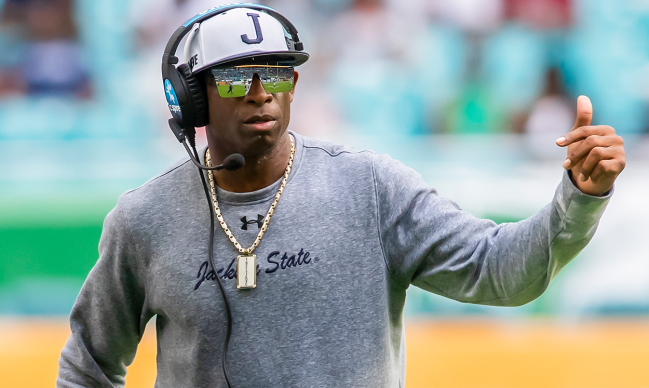 Jackson State football finished the 2021 season with a program-best record and a SWAC championship. As the Tigers look toward the 2022 season, they are bringing the swagger and confidence instilled in them by their head coach, as well as a chip on their shoulder.

In many cases, the players at Jackson State either transferred in for a second chance on the D-I level or didn’t get many looks out of high school. As a result, they enter the program ready to work and ready to prove themselves.

Coach Prime likes that. He likes the extra edge.

Take a recent spring practice fight between Tigers for example. Earlier this month, as Jackson State took to its new turf practice field for spring ball, two teammates got into it and one of them swung on the other.

A fist fight broke out between the two Jackson State teammates as a result and Deion Sanders let them throw.

Those involved, based on roster numbers from last year, appear to be 6-foot-3, 330-pound lineman Rufus Carl Jones and 6-foot-3, 280-pound defensive lineman Jeremiah Williams. The two big bodies were chucking HAYMAKERS at one another.

While most coaches might hurry to try and stop the fight, Sanders let them duke it out. He explained that not only does every team fight, but the players are wearing helmets so nothing dangerous is going to happen and he would prefer that they get their frustration out before breaking it up.

After the two players went at one another, Coach Prime restored order to both sides and continued practice as normal. He didn’t want to glorify the fight, nor did he want to make it part of the culture at Jackson State. It was a one-off thing that he would rather let play out than put a stop to it and let that beef continue to fester between the two players.

Sanders has played under some of the best coaches in history and is in the NFL Hall of Fame. He knows a thing or two about football and his first full year at Jackson State was a resounding success. Maybe more coaches should let their players get their frustrations out instead of shutting it down and painting a negative light on the situation?